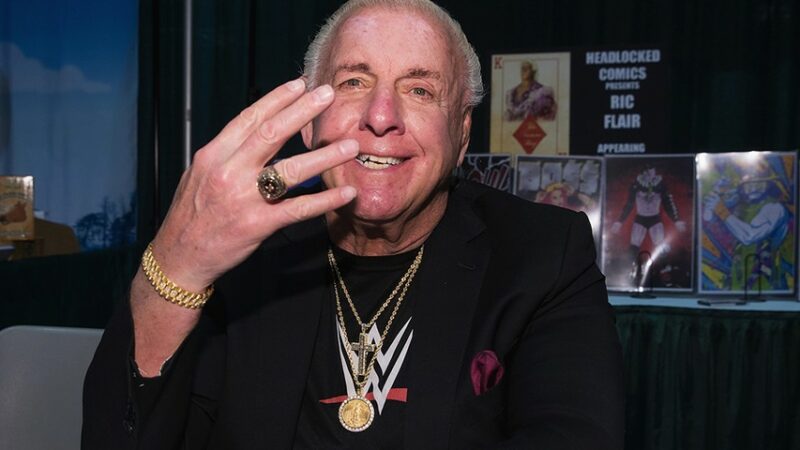 WWE Hall of Famer Ric Flair has become a controversial name in the pro-wrestling fraternity with his actions. He had also previously asked for his release from WWE which was granted. Recently, WWE star Lacey Evans deleted a tweet about ‘The Nature Boy’ after revealing what the WWE Hall of Famer told her when he saw her on RAW last year. Previously, it was noted that Ric desperately begged for job.

Lacey Evans has been absent from WWE programming for about a year now. She was previously involved in a controversial romantic angle with Ric Flair on RAW in early last year, shortly before she took a hiatus due to her pregnancy. Evans recently tweeted a throwback picture with Flair from an episode of RAW Talk. Evans wrote that she was scheduled to do a segment with Flair on RAW. When Flair saw her before the segment, he made a comment Evans seemingly found amusing, judging by her tweet.

Flair and Evans’ romantic angle started in January last year. The angle saw Evans flirting with Flair, which eventually led to The Nature Boy managing her on WWE TV. They went on to have a feud with Ric’s daughter Charlotte Flair which Ric revealed did not enjoy.

Evans was set to face Asuka at Elimination Chamber 2021 with the latter’s RAW Women’s title on the line. On February 15, 2021, Evans’ real-life pregnancy was announced, resulting in her hiatus from WWE. On October 16, Evans announced the birth of her second child via her official Instagram handle.