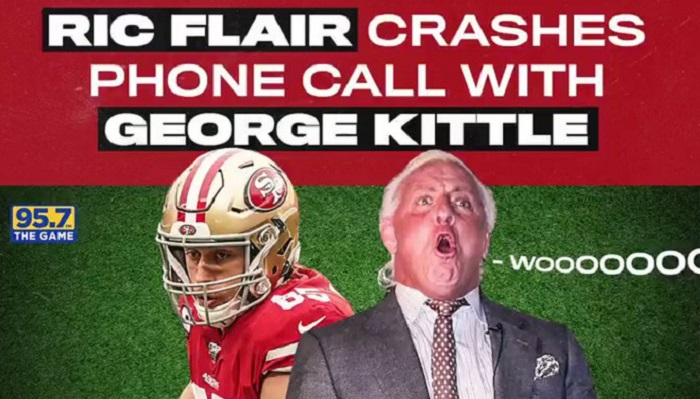 Pro wrestling legend Ric Flair made a surprise radio appearance on 95.7 The Game on Wednesday to congratulate and offer veteran advice to an NFL superstar.

“The Nature Boy” unexpectedly called in to the popular sports radio talk show to congratulate the special guest who was on the air at the time, NFL player George Kittle, on signing a five-year contract extension with the San Francisco 49ers.

The two-time WWE Hall Of Fame legend noted that after signing the deal reportedly worth upwards of $75 million, Kittle too has reached “limousine-ridin'” and “jet-flyin'” territory.

“Are you kidding me?!” a star-struck Kittle responded. “That’s awesome! Oh my goodness, you guys put me on the spot with Ric Flair? That’s incredible!”

Flair later offered a bit of veteran advice to help the gridiron great learn one of the most important ways to remain in the “limousine ridin'” and “jet-flyin'” category — don’t get divorced.

Check out the complete George Kittle interview featuring the surprise call-in from Ric Flair below, or by visiting Radio.com.