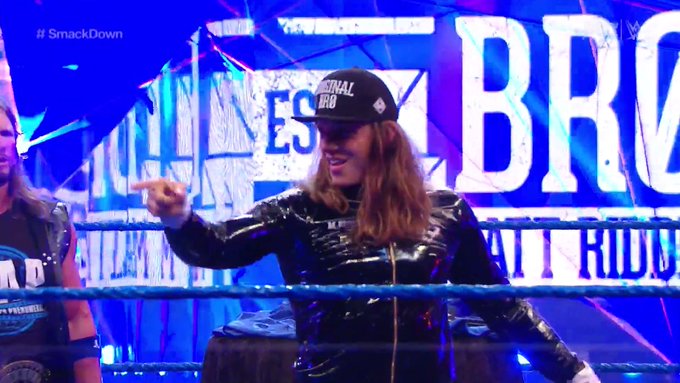 Earlier this year, Matt Riddle’s name was brought under scrutiny by Samantha Tavel, AKA Candy Cartwright. Tavel claimed that Matt Riddle sexually assaulted her in 2017 following an EVOLVE show. In October, she filed a lawsuit against Riddle, EVOLVE,  Gabe Sapolsky, and WWE, suing each for $10 million.

In an update provided by PWInsider, Matt Riddle has filed a motion to dismiss the lawsuit. Riddle again confirmed that he and Tavel entered an extra-marital affair in 2017.

“Mr. Riddle emphatically denies Ms. Tavel’s torrid tale. He and Ms. Tavel had a nearly three-year affair during which they engaged only in consensual sexual activity. In July 2019, Mr. Riddle ended his affair after his wife learned of the relationship. In June 2020, Ms. Tavel tweeted an accusation that he sexually assaulted her in a van while other wrestlers were asleep.”

Riddle’s motion hinges on the belief that Tavel’s suit fails to establish that the Circuit Court of Cook County has jurisdiction over Riddle. Neither Tavel nor Riddle are residents of Illinois, so it’s believed that Riddle cannot fall under their jurisdiction. Furthermore, Tavel’s claims also don’t have enough evidence to bring anything beyond speculation.

“Ms. Tavel pleads two specific alleged assaults – one in April 2017 and one on May 19, 2018 – but no facts that tie these alleged injuries to Illinois.”

Regarding the specific incident from May 2018, Riddle filed an affidavit by videographer Joseph M. Ranta, who transported several performers from the event to their hotel in Michigan. On that night, Riddle and Tavel sat in the back seats of the van while Keith Lee, JD Drake, and Anthony Henry were also in the vehicle.

Cartwright’s claims that Riddle assaulted her in a van of sleeping wrestlers were not backed up by the affidavit. However, it also didn’t deny any wrongdoings had taken place. The records from Ranta’s GPS of that evening were also submitted as evidence in the case. They left the Summit Park District in IL on 5/20/18 at 12:26 AM. From there to Indiana, at 1:10, Ranta stated that only Keith Lee had fallen asleep.

Going forward, after exiting a Denny’s at 2:35, they drove 2 hours and 37 minutes to Ranta’s home in Mason, Michigan. On this leg of the trip, Drake, Lee, and Henry had all fallen asleep. After Ranta, Riddle, and Tavel spent twelve minutes at Ranta’s home, they drove to The Comfort Inn Metro Airport near Detroit, Michigan.

Riddle’s filing claimed that, if any incident did take place, it did not occur in Illinois:

“Based on Mr. Ranta’s GPS and Ms. Tavel’s June 19, 2020, Twitter post, the earliest time the assault could have occurred was during the 2.5-hour drive between the Denny’s in Portage, Indiana, and Mr. Ranta’s residence in Mason, Michigan. Therefore, it is impossible to state a claim under the IGVA for violence that did not arise in Illinois between nonresidents of Illinois.”

Following that, Riddle’s filing claimed that it was implausible that he would be able to assault Tavel in a van full of talent. If something had taken place, surely someone would have noticed.

WWE has already argued that they did not have Matt Riddle under contract until July 2018, and had no involvement or overview of the EVOLVE event of the night in question. For now, neither Sapolsky or EVOLVE have responded to the lawsuit.