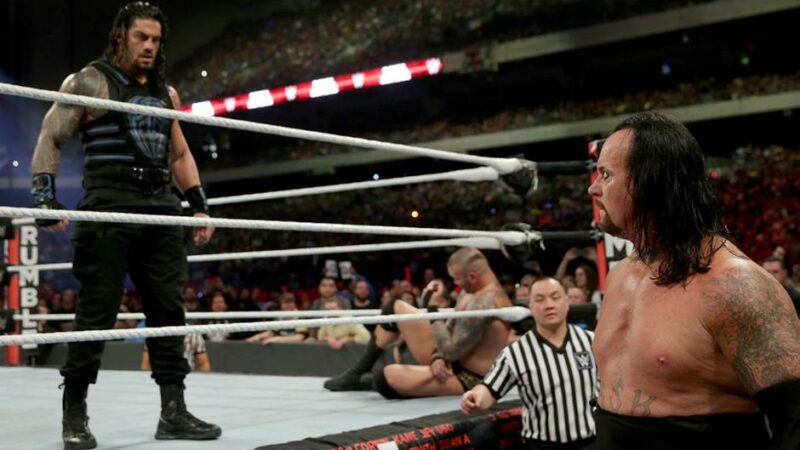 WWE Hall of Famer The Undertaker is one of the greatest stars of all time, and he recently was spotted at SummerSlam breaking character with Roman Reigns.

The dark gimmick has been one of the iconic ones the fans have ever seen. While, The Judgement Day (Damien Priest, Finn Balor, and Rhea Ripley) is at their peak with their recent destruction but they are open to recruit ‘The Deadman’ if it’s possible.

Damien Priest opens up on The Undertaker

In a recent interview with WrestleTalk, Priest sarcastically talked about The Deadman being a part of their stable. The Archer of Infamy added that there is no chance of the WWE Hall of Famer actually joining their faction:

“Uh, The Undertaker, right? *laughs* Nah, it’s funny we talk about it all the time, like recruiting people and wanting people to join. There’s a lot and it’s not one of these things… it’s not… we’re not secluding ourselves, we’re open. Join us, you know, if it makes sense.

Former United States Champion had also commented on the WWE Hall of Famer Edge returning at SummerSlam with a new character. The Rated R Superstar went on a hiatus for several weeks after being kicked out of The Judgment Day, a group he started. He made a surprise return at The Biggest Party of the Summer during Finn Balor and Damian Priest’s tag team match against Rey and Dominik Mysterio. He helped The Mysterios defeat Judgment Day, turning babyface in the process.

During the same interview, he stated that he was excited to see Edge at SummerSlam and would be interested in working with the WWE Hall of Famer at Clash at the Castle.

“So exciting, you know. Obviously having a legend like that returning, it’s good business for us. It’s only going to elevate The Judgment Day. It creates excitement for our fans. The idea of Clash At The Castle, the possibility of what can go down, what we can do, it’s all positive. So for us and myself personally, it’s exciting, it’s awesome. It’s some of the reasons, this is the stuff we love about what we do. So I’m all for it,” said Priest.