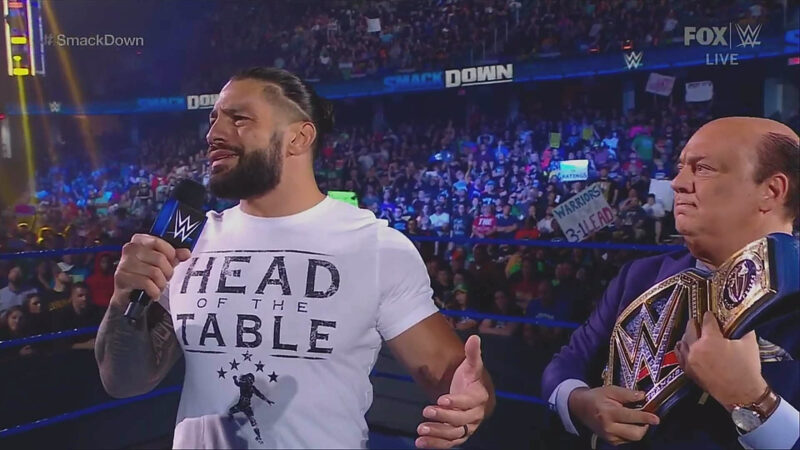 The YouTube sensation Logan Paul is set to challenge Roman Reigns for the Undisputed WWE Universal Championship at the Saudi Arabia event, Crown Jewel 2022. ‘The Maverick’ had also called out Roman Reigns to a press conference during the latest edition of Friday Night SmackDown. Following the conference, Roman Reigns spoke to Behind The Gloves and he was asked to share his thoughts on Logan claiming that the undefeated star Floyd Mayweather was not able to knock him out in the exhibition match and neither can Reigns.

‘The Tribal Chief’ said that Mayweather held Paul up so that he would not get knocked down.

“Floyd was able to stop him from falling down on the mat, you know when he cracked him.”

“But, I not nice man, Mayweather is nice. I’m much bigger, much stronger and we are not going to have a exhibition, I’m going out there to smash him.”

Meanwhile, Paul has been vocal about his paycheck regarding his bout against the undefeated boxing star Floyd Mayweather. ‘The Maverick’ has now decided to take legal step as the issue over his fight purse remains unresolved.

The YouTube star shared the ring with the boxing legend last June in a hugely successful exhibition fight, which sold around one million pay-per-views and generated huge revenue. Paul was expected to be paid a purse of around $15million from the fight with the boxing legend pocketing a mega $65m from the event, but the YouTube sensation has alleged he is yet to be paid the full amount.

Paul has threatened legal action on multiple occasions during their war of words over the final payment, which the boxing legend has strongly dismissed claiming he is even waiting for some of his own final purse amounts. However, Paul has insisted the situation remains ongoing and he is hoping for a resolution to be found in court.