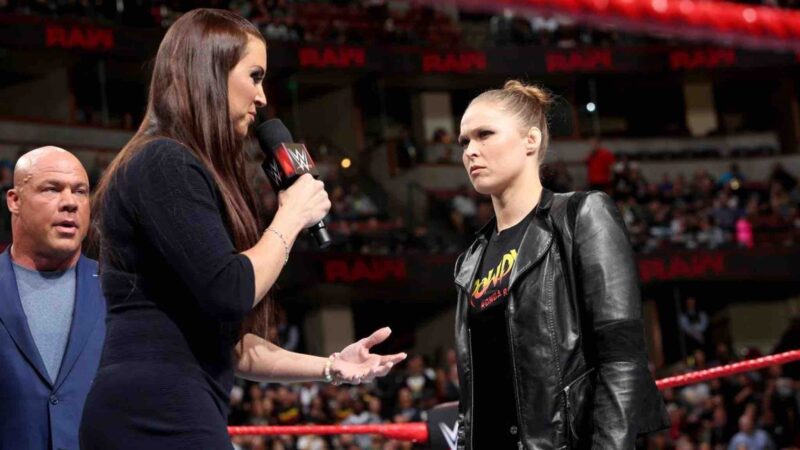 Ronda Rousey has become a huge star in WWE as well following his successful MMA career. She had sent shock waves after debuting during 2018’s Royal Rumble event. Prior to that, she was featured in a memorable segment with Stephanie McMahon, The Rock, and Triple H at WrestleMania 31. It turns out, she had made a major demand before signing with Vince McMahon’s company.

While speaking to The Kurt Angle Show, Ronda Rousey revealed that she demanded WWE let her finish things with Stephanie McMahon before she signed a contract with the company.

Ronda Rousey is the reigning WWE SmackDown Women’s Champion. Rousey is set to defend her SmackDown Women’s Title at WWE Money in the Bank against Natalya on July 2nd. Previously, WWE announced it would be moving Money in the Bank in Las Vegas, Nevada from the 65,000-seat Allegiant Stadium to the 17,000-seat MGM Grand Garden Arena. It has been reported that the change was made due to the low ticket sale.

Speaking about Stephanie McMahon, she recently came up with a shocking announcement when she let the pro-wrestling world that she is taking a hiatus. She announced that she’ll be taking a “leave of absence” from WWE. Announcing on Twitter, Stephanie wrote the following statement that she’ll be stepping down from the majority of her responsibilities in WWE to focus on her family. She also added that she’s looking forward to returning.