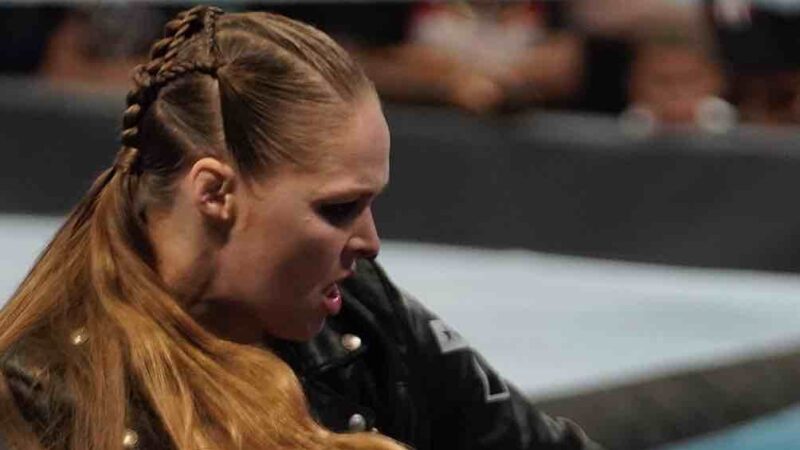 Ronda Rousey revealed her face is in rough shape after WWE Smackdown. She wrote, “Gotta give it to @shotziwwe, – though I’m missing a chunk out of my cheek from that manicured fishhook – at least she had the gumption to come at me head on.

Whereas there’s friends for a reason, friends for a season and then there’s this bitch @natbynature – btw I still think Uncle Bret does the sharpshooter better than you 🖕🏼”

The reigning WWE SmackDown Women’s Champion Ronda Rousey is set to take on Natalya at Money in the Bank. Natalya recently sent a bold statement to the champ after brutally attacking her on the latest edition of SmackDown. As a result, ‘The Baddest Woman On The Planet’ suffered a “serious injury” that has put the title clash in jeopardy.

Ronda squared off against Shotzi on SmackDown. Ronda made Shotzi tap out following an armbar. The champion attempted to celebrate her victory, but Natalya attacked her from behind. The BOAT applied a sharpshooter on the SmackDown Woman’s Champion following her win over Shotzi. Later on, Kayla Braxton revealed Ronda suffered an injury  after the attack and her match at MITB could be in peril. But all that seems to be a work, only to hype up the fans for the big match at Money In The Bank.

Previously, WWE announced it would be moving Money in the Bank in Las Vegas, Nevada from the 65,000-seat Allegiant Stadium to the 17,000-seat MGM Grand Garden Arena. It has been reported that the change was made due to the low ticket sale.

According to WrestleTix, the event has sold more than 98 percent of available seats. As of Saturday afternoon, nearly 11,900 total tickets had been sold. Allegiant Stadium hosted the marquee SummerSlam 2021 pay-per-view and welcomed 51,326 spectators. The SummerSlam 2022 event will take place at Nissan Stadium (home of the NFL’s Tennessee Titans) in Nashville, Tennessee on July 30. The stadium has a capacity of 69,143.

We will now have to wait and see if Rousey legitimately sustained an injury.

What are your thoughts on the matter? Tell us in the comments section below.