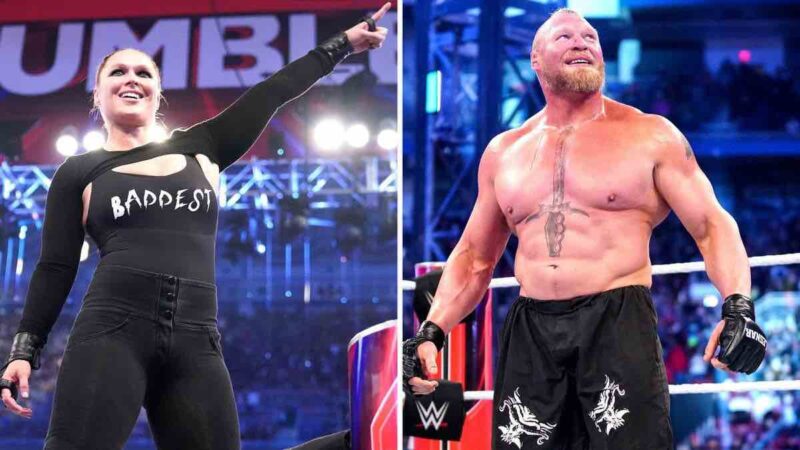 Ronda Rousey is The Baddest Woman on the Planet. Her in-ring prowess can be felt in the ring by her opponents. While she is still green in the ring, she talked in her live stream about another UFC fighter who is a professional between the ropes, Brock Lesnar.

The former SmackDown women’s champion called him the coolest. She did mention that the two never crossed paths in the MMA because Brock was there before Ronda made her entry. Notably, Brock was in the WWE in 2002 and became the youngest WWE World Champion in the company’s history. Ronda had this to say about The Beast Incarnate:

I think he’s fantastic. I think he’s awesome … We kind of didn’t cross paths in MMA, he was kind of before my time a little bit but since coming to WWE, he’s been the absolute coolest. He’s super smart, I never would’ve guessed. In MMA I always just kind of assume, you know, fighters are all of a certain … They’re not the scholarly types, the most of them.

The Box-Office Attraction won the Royal Rumble in 2003 and the Money in the Bank contract in 2019. His boombox approach received fan appreciation. Brock has never been displayed as a chilled-out person before.

He has won a total of 10 world championships and has headlined WrestleMania on five different occasions. The recent one happened on night two of this year’s WrestleMania. Lesnar lost his match to Roman Reigns at SummerSlam after The Head of the Table put various items on him to win via a count out in the last man standing match.

While Lesnar is not on television weekly, Ronda is currently challenging Liv Morgan for the SmackDown Women’s Championship at Extreme Rules. The champion won it after she cashed in her Money In The Bank briefcase on Ronda Rousey after her match at the show of the same name.

Liv has defied odds, but will The Miracle kid be able to pull off another miracle against the former women’s champion just like she did with The Queen of Spades is something we need to see.

What do you think of Ronda Rousey praising Brock Lesnar? Drop your thoughts in the comments.