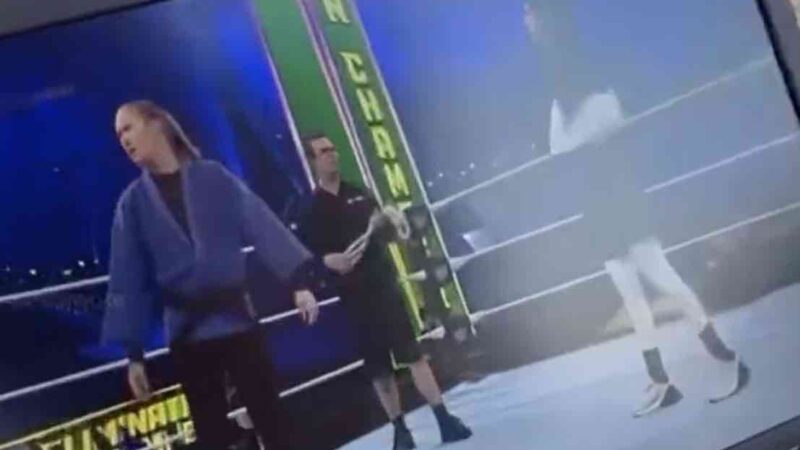 Ronda Rousey was filmed rehearsing her WWE Elimination Chamber match in a new video leaked below.


While many stars are rumored to return at Elimination Chamber, Bray Wyatt and Braun Strowman won’t be back. Wyatt infamously lost to Goldberg in Saudi Arabia in 2020.

Looks like Ronda will actually be wrestling with an arm tied behind her back. #WWEChamber pic.twitter.com/nPRhVUxcFe

The Fiend remains one of the most unique characters to have ever stepped foot inside the squared circle. Bray Wyatt’s latest iteration made its in-ring debut back at 2019’s SummerSlam pay-per-view again Finn Balor, where he won in a squash match. However, his booking since then has been panned by many fans. Particularly him losing to Goldberg at WWE Super Showdown back in 2020. He would lose to Randy Orton at WrestleMania 37 in a singles match after being betrayed by Alexa Bliss last year. He has not been seen on WWE television since then and it would end up being his last match in the company as well. Bray Wyatt could be losing The Fiend to a big name in WWE.

Bray Wyatt was released by WWE on July 31st last year and since then the former WWE Superstar has already teased what he might do next. From what it seems, it is likely he will be making his way to AEW far earlier than expected, as WWE may have let him have a shorter noncompete.

Despite him being by WWE earlier last year, that has not stopped the company from making profits off his name. Adam Scherr has been taking to YouTube to stream weekly streams with CYN and during a recent episode, he called out Bray Wyatt, by using his real name Windham Rotunda.

The former Braun Strowman asked if Windham is a friend or foe, and told him to “answer his damn phone,” in case he wants to fight The Monster Among Men or be his “brother.”