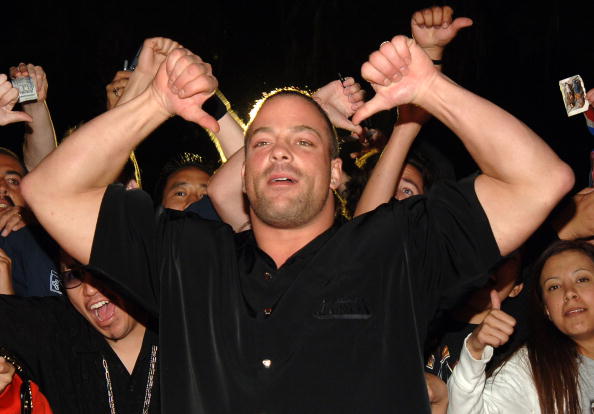 Former WWE Superstar Rob Van Dam was recently a guest on X-Pac’s X-Pac 1,2,360 podcast. You can check out some highlights here:

On his current run with WWE:

“I have a deal now with them, just like [Chris] Jericho, where I can do short term deals. I did a three-month deal and still did sixty-six matches in ninety days, and then the traveling. So then the next time I went back I spread it out a little more, was doing mostly just TVs and that was over five months. It was like eighty matches, or eighty-eight. Me and Jericho have the same deal but I don’t have the ambition that he does. He likes being there a lot. I mean, I really like not being on the road. A lot of celebrities are afraid of being out of sight, out of mind. I’m the complete opposite. I’ve always been trying to do as little as possible and I’m getting better at it all the time.”

On if the WWE contacted him for the brand split:

“No, I haven’t heard from them since, it’s almost been a year actually. It was last October when we talked, and it really wasn’t a good time for me to go out on the road. I had personal stuff that I was going through. But there’s always a dollar amount that makes it worthwhile, you know what I mean? But the amount that would’ve made it worth it for me to go out and work wouldn’t have been worth it for them and what they were thinking, and so that just didn’t work out, which was good because I really wasn’t wanting to do it then. And also I might’ve scared them away with the number it would’ve taken to make it worth my while. So no, I really haven’t even talked to them.”

On what happened when he tried to take a picture with Jean-Claude Van Damme:

“When he came in my manager went up to his entourage because he was walking through and he said, hey you know, could we get a picture of him and Rob for the web site or something? He said, oh he doesn’t have time. Alright. Whatever. So I was like, we tried, whatever. While I’m walking around I saw up onstage he was answering questions to a crowd in the auditorium and at the same time taking pictures with a line of fans one at a time. And so I said, well sure I’ll just get in line and get a picture, that’d be cool. And I get in line and all the fans got excited and they’re like, oh oh oh, and so they pushed me right up to the front of the line so that I’m next. I’m standing onstage and Jean-Claude was talking, answering a question, and when he saw me he totally lost his train of thought and he was just like, ‘I was very lucky to have a father who…’ and he just saw me and if looks could kill. He said something to his handler and they guy goes, OK no more pictures, this was the last one. And they’re like, no, no, one more, and he’s saying, no more. And then he’s trying to answer the question, he’s trying to talk and they started going, ‘RVD! RVD!’ which was rattling him and they guy came over and he dispersed the line.”

On taking risks in the ring:

“When you’re an entertainer you’re looking to entertain. You know what I mean? I really want to pop the crowd. I want to show off. That is the one thing that I’ve always loved about my career is I just want to show off. I always hated the storylines. I always hated when I had to do the promos, especially because I got to push their agenda and try to tell you that this championship match is more important than anything in the world to me. Come on. No, it’s not. But I like getting in the ring and showing off and that feels real to me, that connection with the crowd, even when the office is trying to do stupid things with me and turn me heel, or try to make it so fans don’t like me. That connection, that real connection is the fans saying, no, we dig what he’s doing.”