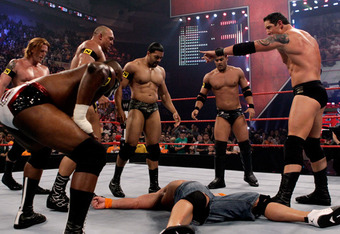 Former WWE Superstar Ryback continues to air out dirty laundry with his former employers, and this time around on a new episode of his Conversation With The Big Guy podcast, he dished on company big man John Cena and his experience with the leader of the Cenation during his run with the Nexus:

“None of us know what’s going to happen with our careers, but we know we’re going to be a faction called The Nexus. And for a lot of the WWE Universe, a lot of fans, they loved it. It was a great faction and it was underutilized.”

“[Wade Barrett] was the mental leader. I was the physical leader. I always kind of put it as that. Like, and I felt like that came across very well with the dynamic of the group that we had. And I felt like people got that. I felt like we both played our roles perfectly in that and that’s why, a big part of why that all worked, along with everybody else that added their [contributions]. [Justin] Gabriel was the highflier and Gabriel was a huge part of it too, I feel and everybody was. Everybody had their role.”

On John Cena ending it:

“It was not used properly mainly because of John Cena. f–king marks, that’s your headline for the f–king week. And it’s a fact across the board. Everybody knows it and he did not want that to go any further than what it was going to go passed because it was working, because it was eight guys getting over naturally. That’s why. God forbid guys get over naturally.”