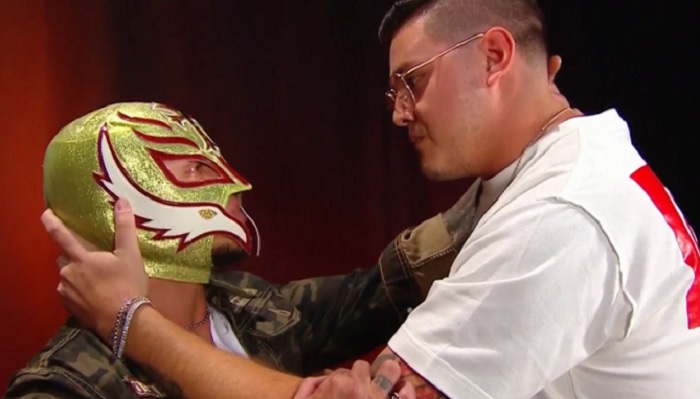 Could Rey Mysterio jump from WWE to AEW?

The Big Guy has an interesting take regarding Rey Mysterio’s current status.

Former WWE Superstar Ryback spoke at length about the possibility of the future WWE Hall Of Fame legend possibly signing with All Elite Wrestling (AEW) instead of WWE when his latest contract with the latter promotion expired.

During his “Conversations With The Big Guy” podcast, Ryback broke everything down from a veteran wrestler’s point-of-view, explaining why he hoped Mysterio would sign with AEW, but ultimately wouldn’t be surprised to see Rey Rey continue to sport WWE colors.

Featured below is an excerpt from the podcast where Ryback explains his take in great detail.

Yeah, I mean I would love for him to end up in AEW. And I’ve heard those numbers — and again, speculation. Because I’m not directly involved and you can only go by what you’re told. And the numbers are not bad of different things, but that is what it comes down to. If they’re giving you a per [show] — and this is just a random number. If WWE is offering you $1 million and AEW is offering you like $400,000, and you’re only working one day a week. But if you break it down, you’re actually making what you would make in WWE for the same as far as per match.

With that then, it comes down to, ‘Do you want the money?’ But it also comes down to what you’ve got going on in life. So like Rey’s a wrestler, right? Rey’s not running a business or doing other things that I know of anyway. Maybe he is, very well could be. But maybe that number — whatever it is, $3 million, $4 million. Whatever it is that WWE has given him is more enticing to him at this point in his life than taking the lower amount, even though it’s less dates. He knows he could suck it up, he has another year or two in him. He’s just gonna get through it. His son is tied into it now, tied into a major angle. They’re great at figuring that sh*t in on their end.

I wish AEW would – personally, it’s not my money – but I wish they would get a guy like Rey. I think it helps tremendously, getting every big talent they can. And Rey works hard. Rey’s a hustler, man. He’s not gonna just come in there and just collect a check. He’s gonna go out there work with all your guys. The other guys on the show, man. He’d just elevate everybody, especially a lot of the smaller guys, and teaching them selling and psychology because Rey has that. He’s the gold standard of that. So that’s where I kinda look at it. Man, that’s a valuable asset to have for your promotion, even if he’s not wrestling. Pay him that money just to be backstage.

Listen to Ryback commenting on Rey Mysterio’s status from his “Conversations With The Big Guy” podcast via the clip embedded below.

(H/T to 411Mania.com for transcribing the above Ryback comments from his Conversations With The Big Guy podcast.)