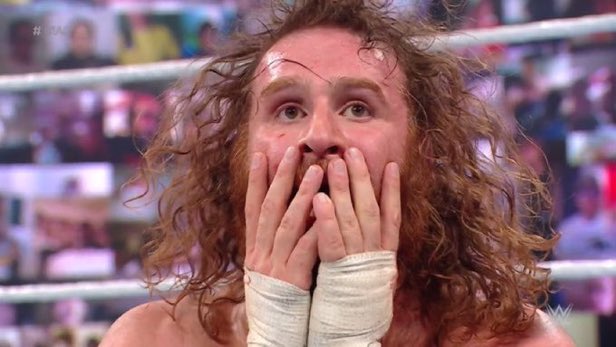 WWE Smackdown star and former WWE Intercontinental champion Sami Zayn defeated his long-time nemesis Kevin Owens in a hard-hitting match at the 2021 edition of WWE Hell in a Cell. Even after a brutal back-and-forth encounter which saw Zayn bleeding from the mouth – ‘The Liberator’ would hit his finisher, the Helluva kick to finish the job. Sami Zayn revealed earlier this year that he ‘hated’ this Kevin Owens match.

However after the match, Zayn went up to the broadcast team of Michael Cole a d Pat McAfee – stating ‘you didn’t want me to win, did you [Michael] Cole?’ Also questioning if the ‘people in Michael Cole’s headset’ didn’t want him to win either. This of course, is a direct reference to WWE Executive and Chairman, Vince McMahon who is notoriously known to give instructions to WWE commentators like Michael Cole during WWE events and while matches are in progress.

Over on the Squared Circle subreddit, wrestling fans and members of the WWE universe discussed the grudge match between Owens and Zayn that took place at Sunday’s pay-per-view. One Redditor user named TinManGrand proclaimed: “It’s real neat that Kevin allowed the company to let him put on an absolute master class in selling for the next twenty years of trainees. There’s like four comments in this thread saying how Kevin was clearly actually injured at the start of the match. Nope…just a master seller.” While FatGuy1414141414 said: ”
Did not expect Sami to win, not clean anyway. And bleeding from the mouth is a cool visual. Another good match, this show so far is pretty good I must say.: