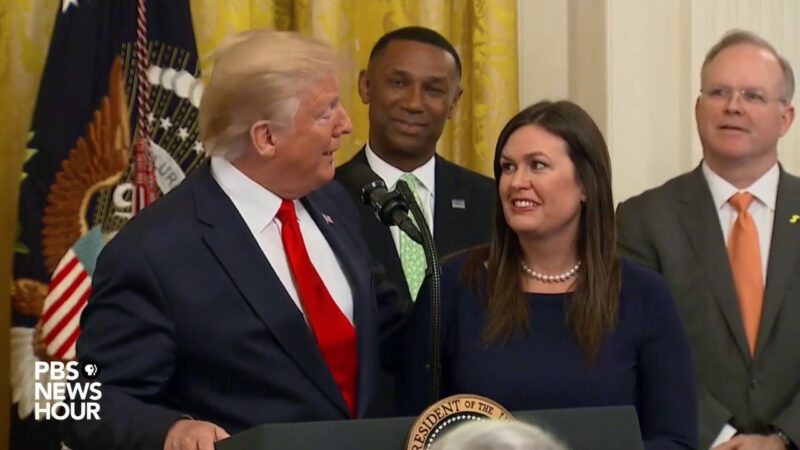 Sanders was asked about whether she would endorse the former president’s 2024 run and she did not, saying:

“My focus right now has been on 2022, winning the election in November, preparing through transition and getting ready to take office, as I did this past week. I love the president. I have a great relationship with him. I know our country will be infinitely better off if he was in office right now instead of Joe Biden,” she said on “Fox News Sunday.”

Sanders, ​a Republican ​who was sworn-in last week as Arkansas’ first female governor, said her top priority is running the state.

“Right now, my focus isn’t 2024, it’s focusing here, in Arkansas, in doing what we can to empower the people of this state, and make sure that I’m delivering on the promises that I laid out over the course of the last two years​,” she said.

Fox News’ Shannon Bream asked Sanders about a possible timeframe for making a decision — whether it would depend on what other Republican hopefuls enter the presidential race or until a nominee is selected.

“Again, my focus isn’t on 2024. It’s on what we can deliver in this legislative session,” Sanders replied.

“I’m not going to set an arbitrary timeline,” she continued. “I’m not really focused on that at all, but focused on what we can do to impact change and deliver on the promises that we made during the campaign season here in Arkansas​.”

Bream also questioned Sanders about speculation in the media before Trump announced his third run in November that she could be the former president’s running mate, or if Trump didn’t throw his hat in the race, that she could be on a ticket with Florida Gov. Ron DeSantis. ​

​Sanders, who was Trump’s White House spokeswoman from July 2017 to June 2019, again spoke about delivering on her campaign promises, noting she feels “pressure” to do so, and said she would serve as governor for two terms if re-elected: