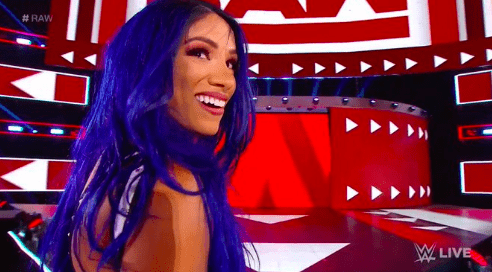 As seen on this week’s post-Summerslam episode of Monday Night RAW, the Boss Sasha Banks made her long-awaited return to the company. The Boss interrupted Natalya after she gave an emotional speech on RAW.

The two Superstars hugged in the middle of the ring before Banks beat Natalya up viciously and turned heel. Becky Lynch tried to make the save but was taken down and beat up with a series of brutal chair shots.

Banks also wore a purple wig but soon threw it out to reveal her new blue hair.

It's a melee between @BeckyLynchWWE and @SashaBanksWWE on #RAW! pic.twitter.com/rypnQflAmL

The fans were elated to see Banks back in a WWE ring for the first time since WrestleMania 35. It will be interesting to see how she’s booked from this point on.