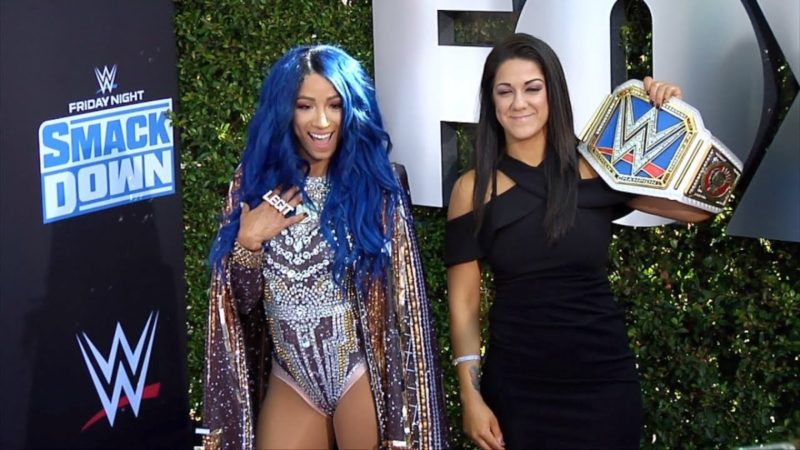 Sasha Banks and Bayley have taken the center stage in WWE’s women’s division throughout the past few months of pandemic. Their storyline of best friends-turned foes have often drawn more views than any other segments on the episodes of SmackDown.

After her first ever women’s singles title defense against Bayley in November 6 episode of SmackDown, Sasha Banks opened up to Digital Spy about the inspiration behind their storyline.

Sasha Banks won her first SmackDown Championship at Hell in a Cell last month defeating Bayley in arguably the best match of the night. She said that it was a big deal for fans to consider it to be so. She loved how the match went and also the fact that she got to do it with Bayley.

Banks revealed that the year-long storyline of friendship turning to enmity with Bayley is ‘everything she ever wanted’. The idea was inspired by a similar storyline involving former Women’s Champions, Trish Status and Mickie James.

“Five years of this journey, of this friendship growing and growing, and then Bayley turning on me… it’s been everything that I’ve ever wanted.

Mickie James debuted in WWE in 2005 in a storyline where she was an obsessed fan and admirer of Trish Stratus. The friendship eventually turned into rivalry with James turning heel when Stratus rejected her advances. The storyline lasted almost a year and led to James winning her first ever title at WrestleMania 22.

The Boss is on a roll

A returning Carmella attacked Banks after her successful title defense against Bayley on SmackDown. It hints at a possible feud brewing between the two Superstars, one Bank’s rivalry with Bayley fizzles out.

Sasha Banks is having a great time in her career outside WWE as well.

She recently starred in the second season of the Star Wars spinoff Disney+ show, The Mandalorian. She plays the role of Koska Reeves, a Mandalorian warrior on the series.

Banks said in the interview that she is yet to achieve one of her goals – to main event WrestleMania. She hopes it would happen soon, and to do it with Bayley would be a “dream come true”.

Banks also commented on All-Women’s pay-per-view, Evolution. She said she does not understand why there has not been a second edition of the event yet, given how incredible it was for the female wrestlers and the fans alike.