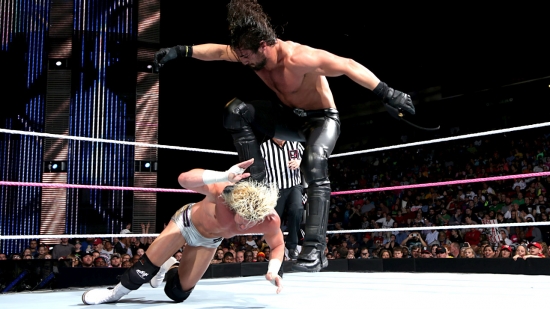 The Architect has been trying to find his own finish since the curb stomp was put on the shelf back in 2015. Rollins revealed back in 2015 that the move had been banned from WWE due to PR reasons.

On Talk is Jericho, Chris Jericho asked what happened to the move. Seth responded, stating that WWE was sending footage to the Today Show, and since the company had been moving towards a more kid-friendly image, decided the move was too easily imitable. Since then, Rollins has experimented with a handful of moves.

None of the moves Rollins used, however, seemed to fit. They all seemed a little lackluster compared to the rather impactful curb stomp.

Tonight, though, it seems that WWE’s ban has been lifted. On Monday Night Raw, Seth Rollins fought Finn Balor in a rematch of their Universal title match back in 2016.

Jason Jordan tripped Balor up, and before he could get back to his feet, Rollins hit him with the curb stomp. The crowd erupted, as did Corey Graves, who called the move the “Blackout,” which was the name of the move while Rollins was under the name Tyler Black in ROH.