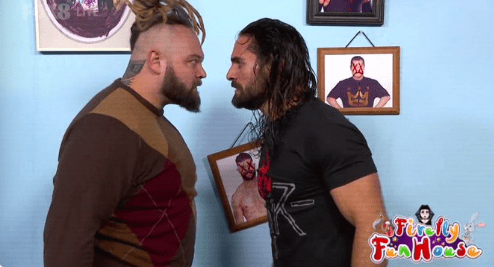 As seen on this week’s episode of Monday Night RAW, Bray Wyatt hosted another episode of the Firefly Fun House. However, before he could properly begin, he was ambushed by none other than Seth Rollins.

Rollins attacked Wyatt and initiated a beatdown on the host of the Firefly Funhouse. Rollins then spotted the frames of Superstars that have fallen victims to the Fiend and starts throwing them around one by one.

Eventually, the Architect spotted his own photo on the wall and this angered him more as he threw that frame out as well. Wyatt got up and asked Rollins as to why he was doing this to him but the latter attacked him again.

Then Rollins looked into the camera and said “Burn it Down” before setting the Funhouse on fire. Cryptic visuals of the Fiend played in between with Wyatt’s laugh in the background as the Funhouse burnt aflame.