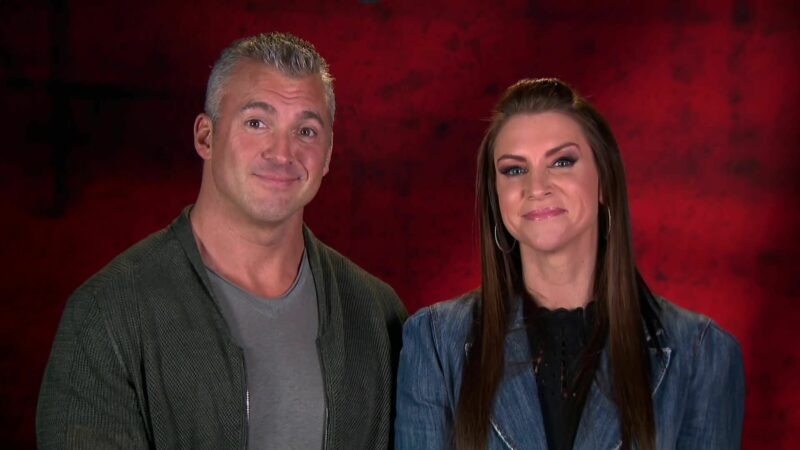 The WWE Evil series includes 8 one-hour episodes. The series is narrated by John Cena, who also serves as the Executive Producer and Creator and it focuses on the villainous characters of the company. Shane McMahon recently said on WWE’s Evil about taking a slap from his sister WWE Chief Brand Officer Stephanie McMahon.

“My sister probably hits the hardest out of anybody on the entire roster with that slap.”

As it turns out, Stephanie McMahon doesn’t believe that traditional sports have anything on WWE. Over the last two decades, WWE’s television rights have gone up substantially compared to where they used to be. Even with more people cutting cable, WWE continues to amass record profits by providing live content for both FOX and the USA Network with SmackDown and RAW.

The WWE Chief Branding Officer recently spoke with Dade Hayes of Deadline about a wide variety of subjects. During the discussion, McMahon stated that she believes WWE’s mix of sports and entertainment gives them a distinct heads up over other traditional sports broadcasts:

“It really is both,” Stephanie McMahon said. “It’s like athletic theater. It’s the story, that’s why you care. (…) You’re swept up in the storylines. We can script the buzzer-beater moments, we can script the Hail Marys. We have a leg up on sports. (…) You may object to what we do, but you’re never going to be bored.”

Steph believes that launching the WWE Network in 2014 and cutting a deal with NBC proves that the company is ahead of a curve when it comes to distributing content to the masses: