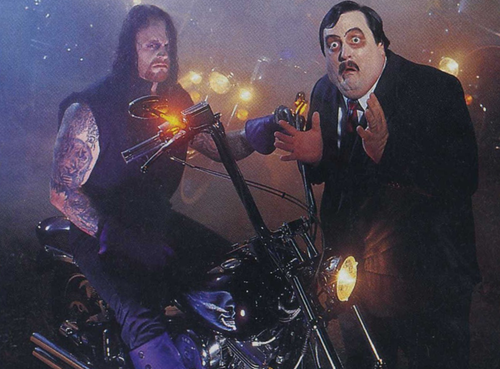 Undertaker was a creation of Vince McMahon.

On a recent edition of ‘Stone Cold’ Steve Austin’s podcast, SmackDown Live Commissioner Shane McMahon revealed the exact moment when his father Vince McMahon came up with the Undertaker gimmick.

The Undertaker is widely considered as one of the, if not the, most legendary professional wrestlers of all time. The iconic gimmick was brought to life by Mark Calaway, and if Shane McMahon is to be believed, the character wouldn’t have possibly been as successful had it not been essayed by Calaway.

Back in the late 1980s and early ‘90s the WWE was trying out outlandish gimmicks- most of which fell flat, so to speak. It was around that time that Vince McMahon interviewed Percy Pringle, who later came to be known as Paul Bearer, brainstorming with the latter coming up with ideas for a new character. Pringle revealed he was a real-life mortician and that, as per Shane O’Mac, was the Eureka moment when Vince baptized Calaway as the Undertaker and Pringle as Paul Bearer.

“It actually came through interviewing Percy because Vince (McMahon) and Pat (Patterson) specifically were talking like, ‘well, give us something. We’re thinking about different characters. Like what have you done in the past?’ And Percy said he had done a couple of other things and he had done this and he mentioned he was a mortician and all of a sudden my dad just locked in on that. He said, ‘you were a mortician? That’s it! He’s The Undertaker. You are Paul Bearer.’ And it was born. That was it.”

Shane asserted that he feels Mark Calaway truly brought Undertaker to life, owing to the latter’s real-life temperament. He added-

“It’s iconic. No, I don’t (think anyone other than Mark Calaway could have pulled off The Undertaker gimmick). It also gets into Mark’s temperament as a human being. That’s who he is. He is Cool Hand Luke. He is the king of the locker room. He is that. Everything is measured and reserved. That’s how he works. His punches are thrown for a reason, not just to throw punches in bunches, but thrown for specific reasons and things like that. Moves are not wasted, so that is who he is as an individual.”

The Undertaker last competed at Wrestlemania 33, losing to Roman Reigns in the main-event of the evening- a match that many fans and pundits feel was the last of the Deadman’s legendary career. The Phenom himself hasn’t given an official statement on his retirement as of yet.

Undertaker will forever live on in the memories of professional wrestling fans the world over. Mark Calaway, who portrayed the character that’s known as the Deadman, ironically brought back life into the WWE; and it was his loyalty toward the WWE brand during the Monday Night Wars that helped WWE turn the tables on WCW. For all the wonderful childhood memories as a pro-wrestling fan- Thank You Taker!