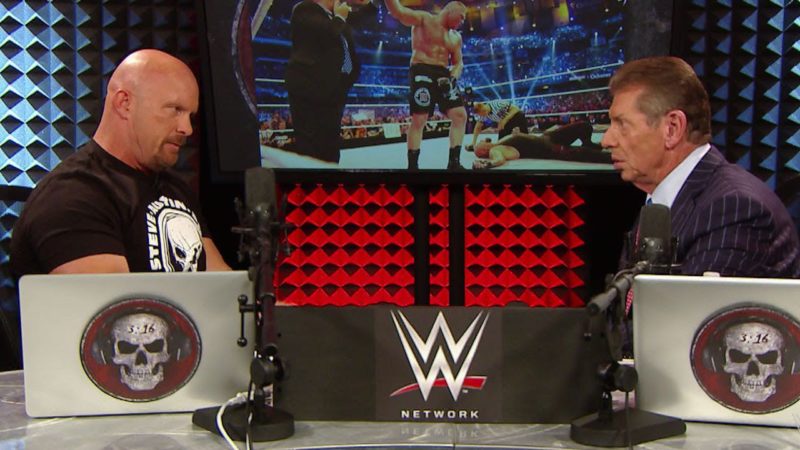 The SmackDown Live Commissioner Shane McMahon recently appeared on The Steve Austin Show and talked about many things, including how Vince McMahon felt at the time when Austin refused to job to Brock Lesnar and quit WWE. below are some of the highlights of the interview:

On Kurt Angle hurting himself during King Of The Ring 2001 in the brutal match with Shane:

On the backstage reaction after the match:

“Kurt and I come back through [the curtain] and it was one of the first-ever standing ovations because that wasn’t given back in the day. And I’m not saying that to brag. I’m saying it because of how appreciative I was and how appreciate the fans were that we put ourselves through that. And it was like, ‘oh my God, that was awesome.’ We get through gorilla, [and] it’s like a morgue. I was like, ‘I don’t know what’s going on here.’ So Kurt and I keep going. I mean, it was silent. My dad was nowhere to be seen. He was so fuming.”

On his wife being angry with him because of the brutality of the bout:

“As we get through the back, there was a whole line of guys, all the boys were applauding. As I turn around the corner on my way to the trainer’s room before we go to the hospital, and then, here comes Marissa, just eyes bawling. She has no idea because I didn’t tell her anything. That’s the one I got huge heat for.”

On Vince McMahon’s reaction when Austin refused to job to Lesnar and how Steve let a lot of people down:

“[Austin was] the guy that was drawing the houses and everything was built around [Austin]. So when you have that much equity at stake and you have your number one player in there and that’s the one who draws money all of a sudden say, ‘I’m out,’ well, it’s very devastating, obviously, to everyone else underneath and everyone felt it, just like, ‘wow’, so [Austin] specifically, you let a lot of people down.”

On how the Boss was hurt with Austin’s decision when he quit:

“Vince was hurt professionally and personally because you guys had been building a good relationship. If you guys did have a disagreement, you’d settle it quickly and talk about it. But at the end of the day when it got down to ‘alright, this is the vision we’re going with when I said we’d paint the room blue, well, you didn’t want to paint the room blue at that time, so you took your paint and went somewhere else.’ So that was a big blow personally as well because, again, it’s the machine and we all put effort into building ‘Stone Cold’ Steve Austin, and the company, and everything else around it. And when that cog leaves, it’s like, ‘oh wow! Jeez, that didn’t feel good!’ It didn’t make any of us feel good. [Austin] let us down, man.”

It’s worth noticing that back in 2002; WWE had plans for Austin to lose to Brock Lesnar. Though apparently, Stone Cold didn’t want to job to Lesnar and the heat between him and WWE Officials over this issue resulted in Austin quitting the company.