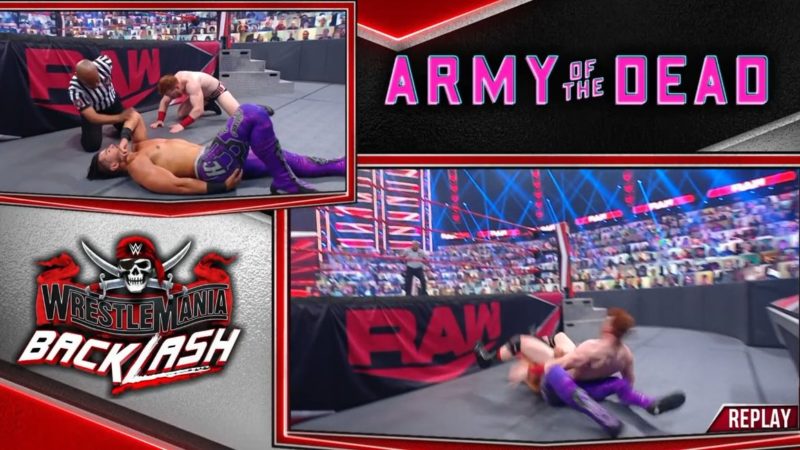 Sheamus and Humberto Carillo’s match was stopped by a ref on WWE Raw when Carillo landed badly during a spot with Sheamus. You can see a video below, where Humberto called for help. Hopefully Sheamus and Humberto are okay. Becky Lynch Famous Ex-Boyfriend ‘Fired.’

The Miz told Out of Character with Ryan Satin he expected Bad Bunny to be booed at WrestleMania, “We had no idea we were singing the rap song that day. We found out that day. ‘Hey, you’re going to perform.’ ‘What?’ I think we rehearsed like three times.

John and I are backstage just rapping the song. We don’t know what’s going to happen with the audience being there. We couldn’t even hear ourselves because the crowd was so loud. It was fun and exciting. The crowd booed us. When Bad Bunny came out, I was expecting [him to be] booed out of the building because that’s what happens with celebrities, but it didn’t happen. He got cheered and it goes to show you that Twitter was wrong.”

Damian Priest told Dallas News Bad Bunny helped him a lot on Raw, ““He actually helped me because he took a lot of pressure off my shoulders just because I had like a buddy to hang out with in the process leading up to WrestleMania when I was also new to Monday Night RAW,” Priest said. “It’s like the new kid at school. You don’t know how people are going to react to you, if they’re going to like you, you know. But at least I had somebody there that made me relax because we would just laugh and goof around, and I think I did that for him, as well.”

Here is the scary spot from Humberto vs Sheamus. You can see Humberto calling for help. #WWERAW