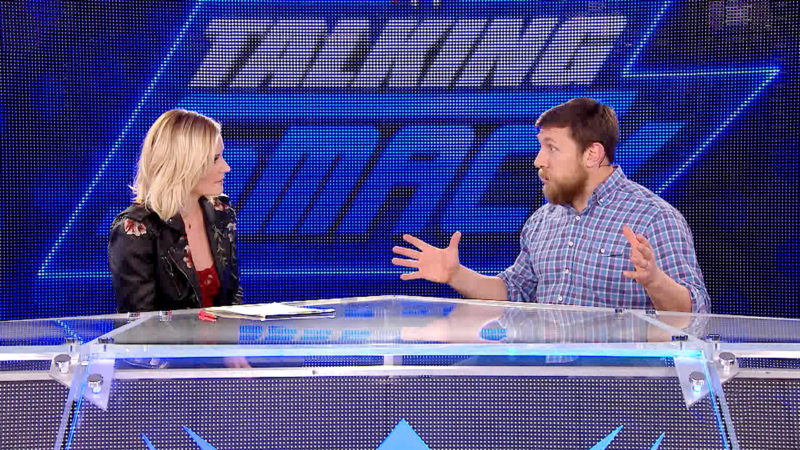 The first episode of Smacking Talk was posted tonight after SmackDown went off the air. Renee Young and SmackDown GM Daniel Bryan welcomed Chad Gable as their first guest. Renee Young was about to ask Gable about his former tag partner Jason Jordan being revealed as Kurt Angle’s son, but Gable didn’t want to talk about that.

Daniel Bryan revealed that he went and got an official paternity test to determine whether Chad Gable was his son or not. Bryan pulled an envelope out of his back pocket and Gable and Bryan opened it together. Gable then revealed a note that was written in marker that read “I am your father hooray!!!”. Bryan asked Gabel for a hug but Gable refused and stated that Daniel Bryan is only five years older than him.

Bryan said that he was a virile child and once again tried to say that Gable was his son. Bryan leaned in for another hug but Gable shoved him and stated that Smacking Talk has a long way to go. Daniel Bryan then broke down in tears and said that he has so much work to do as a new father. Smacking Talk concluded with Daniel Bryan holding back tears for several seconds as he and Renee awkwardly started at the camera. You can check it out in the video below.

Here it is, the very first episode of #SmackingTalk exclusively on TOUT ft. @ReneeYoungWWE & @WWEGable. VERY big news breaking on this show! pic.twitter.com/fJiqyThWy9

The Bella Twins uploaded a video to their YouTube channel of them watching WWE Battleground this past Sunday. Nikki celebrated John Cena’s victory over Rusev by dancing around. During the video, Brie Bella mentions that there are rumors floating around that Nikki might be at WWE SummerSlam on August 20th. Nikki doesn’t deny the rumors and hints at a surprise at SummerSlam.