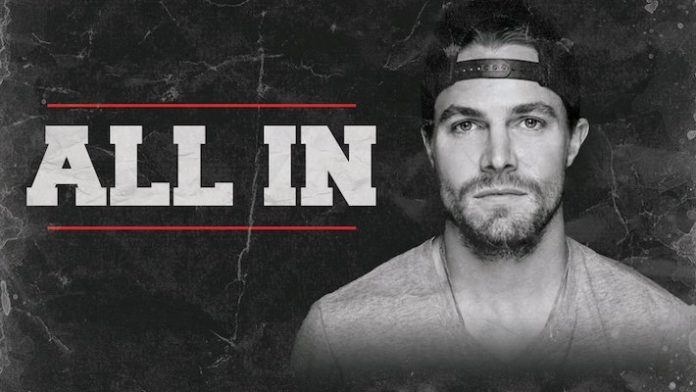 Green Arrow star Stephen Amell is a known wrestling fanatic. Amell appeared a handful of times in the WWE, leading to a tag team match with Neville against Stardust and King Barrett. The Green & Red Arrow team up was successful, as the duo defeated Stardust and Barrett at SummerSlam 2015.

Since Cody left the WWE and joined up with Bullet Club, Amell has been spotted a handful of times hanging out with the group, decked out in Bullet Club gear. When All In was announced, Amell was revealed to be a competitor at the event, as he would eventually face the Fallen Angel Christopher Daniels.

In a little over twelve minutes, Amell lost to Daniels but put on a pretty great show with the veteran. The rookie took to Facebook this week to show his gratitude to everyone for allowing him to be a part of All In while saying that it was probably his last time in the ring.

I want to pass along some gratitude for what was a once in a lifetime, and possibly last in a lifetime opportunity for me. Being a part of the largest independent wrestling show ever was seriously incredible.

Amell went on to thank Daniels, Cody, and Brandi for helping him live his dream.

I want to thank Christopher Daniels for being just a wonderful opponent. Don’t want to break kayfabe, but when it came time to selecting who we wanted me to work with for All In, Cody was very insistent that I be with a guy that has the know-how and wherewithal that Christopher Daniels has.

About three minutes in, I did what I anticipated would happen, and what everyone told me would happen. I blew up! Couldn’t catch my breath and had no idea where I was, and being with a guy like Daniels… I couldn’t have done it without him.

Most of all, I would like to thank Cody, Brandi, and the entire Rhodes family. I’ve known Cody for the better half of three years, and to watch him come out for his match later on in the night and the emotion on his face, and to see him realize a show like All In was really quite amazing. I’m so very proud of him.

Stephen Amell also thanked the Bucks, Jerry Lynn, and a handful of other people who helped him prepare for his match at the event on September 1st.