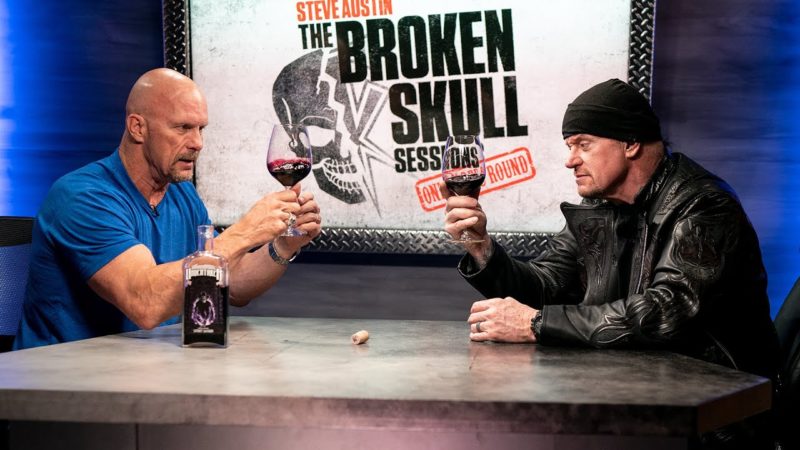 Wrestling greats, Steve Austin and The Undertaker did a wine tasting session when The Deadman joined ‘Stone Cold’ on the Broken Skull Sessions podcast.

Steve Austin raises a glass of wine with The Undertaker

The Phenom, who recently received his Final Farewell at WWE Survivor Series joined the former WWE Champion to test the Deadman’s own branded Cabernet Sauvignon.

“Sometimes I even have to go pick ’em because we’re on a low budget.”

“You know, coming up in the wrestling business, the old-timers always told us, ‘It ain’t what you make kid, it’s what you save. Save your money.’”

The Phenom revealed that he saved his money on pickers.He said:

“I just go out and do it myself… [I picked] all the grapes. And squished them myself with my feet.”

The two wrestling icons then tasted the wine and Austin appreciated the aroma as well as the taste of the beverage.

“It a good aroma to it. It smells rich. That is indeed a tasty beverage! Congrats!’

The icons seemed to have enjoyed the session and Austin having a love for the beverage certainly had knowledge that he liked to flaunt. Austin also recalled his visits to Napa, California, the second largest city in the state’s Wine Country.