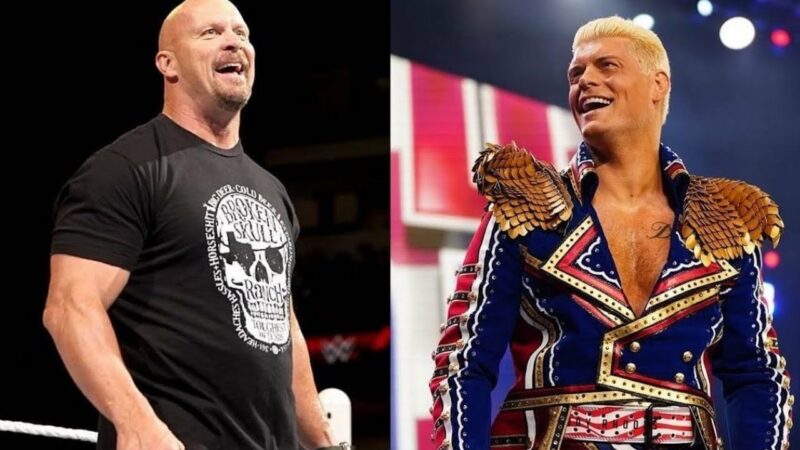 WrestleMania 38 was rightly the ‘two most stupendous nights’ as the show saw the return of Cody Rhodes to WWE as well as the in-ring return of WWE Hall of Famer ‘Stone Cold’ Steve Austin. Recently, a backstage picture featuring ‘The American Nightmare’ and ‘The Texas Rattlesnake’ surfaced on social media. Austin was seen hugging Rhodes after the latter had a brutal fight with Seth Rollins.

The former AEW star Cody Rhodes finally made his return to WWE following numerous rumors and speculations. He was revealed as the mystery opponent of Seth Rollins on WrestleMania Saturday.  Following a hard-fought back & forth battle, Rhodes got the win clean. After months of speculations and rumors, the fans also witnessed the return of ‘The American Nightmare’to the company. The former All Elite Wrestling Executive Vice President was revealed as the mystery opponent of Seth ‘Freakin’ Rollins and he won the returning match to the fans’ delight.

It seems that WWE has changed plans for Cody Rhodes, as he was not on SmackDown last night. ‘The American Nightmare’ had made his presence felt on RAW after WrestleMania. Cody had cut a promo on the show and stated that the reason he returned to WWE was to win the WWE Title in honor of his father, Dusty Rhodes. During an appearance on WWE’s The Bump this week, Rhodes stated that the promo wasn’t scripted.

At ‘The Show of Shows,’ fhe fans also saw the in-ring return of ‘Stone Cold Steve Austin after 19 long years. He defeated Kevin Owens in a ‘No Holds Barred match. He later returned the night two of the show and ended up hitting a ‘Stunner’ on Austin Theory and his mentor, WWE Chairman Vince McMahon, who botched the move.