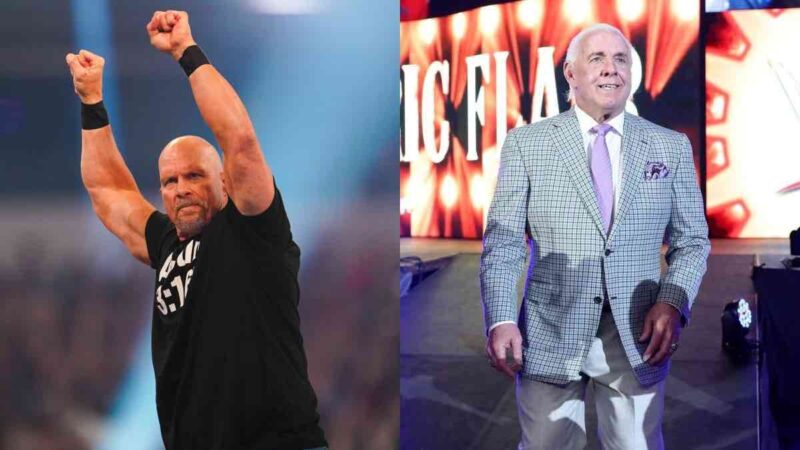 WWE Hall of Famer Stone Cold Steve Austin is seemingly happy that fellow WWE Hall of Famer Ric Flair is returning to the ring at the age of 73 to wrestle his final match. Flair is set to compete in the final in-ring encounter of his legendary career in Nashville, Tennessee, on July 31. The two-time WWE Hall of Famer will team up with his son-in-law, Andrade El Idolo, to face Jay Lethal and Jeff Jarrett. However, it was reported that there is some concern regarding his health ahead of his last match. ‘The Nature Boy’ hasn’t wrestled since 2011, and has been training for months for the bout.

Steve Austin opens up on the match

“Well, it’s gonna be his final match, so I guess he’s in the mood to have one more go and prove he was the man. I’ve said before just talking to you I think he was the greatest traveling world champion that there ever was. There’s a reason he had the belt as many times as he did. He was that damn good. He lived the lifestyle on the road to the nth degree, let’s say.”

Austin himself made his return to the ring at this year’s WrestleMania 38 when he worked a match with Kevin Owens. The Texas Rattlesnake stated that he will not be in attendance for his friend’s last match, but he plans to watch from home:

“For him to have his final match, I wish him nothing but the best,” Austin continued. “I hold him in the highest regard and have the highest respect for him. I’m behind everything he does in the ring. I look forward to seeing it. I wish I could be there in person. Again, I’m not traveling anywhere right now, but I wish him all the best and I know it’s gonna turn out great and I can’t wait to watch it.”