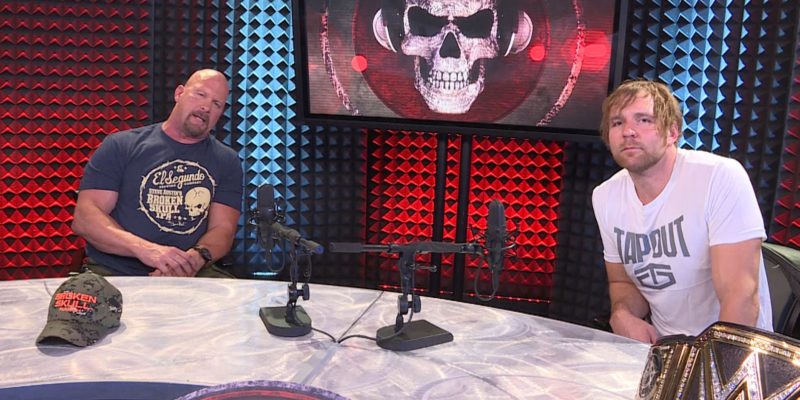 Back in 2014, WWE brought in Stone Cold Steve Austin to produce special live episodes of his podcast on the Network. Over the next two years, the WWE Hall of Famer brought on twelve guests, including Triple H, Brock Lesnar, AJ Styles, and the WWE Chairman himself, Vince McMahon. However, the twelfth and final episode left a bad taste in the mouths of fans.

Jon Moxley, then known as Dean Ambrose, was a guest on the August 8th, 2016 edition of the podcast. It was an awkward interview lasting nearly an hour and one that some fans felt hurt the former Shield member’s character.

During his interview with Tony Kahn on The Steve Austin Podcast, Austin took the time to address the situation with Moxley.

For whatever reason, we got off on the wrong track, and it was a rough podcast. I’ve been carrying 1,000 pounds on my back ever since that happened. I felt so bad about that interview and I was leading the interview. I take the fault of it, because I’m there to get people over and make them come off like a million bucks.

For all this time, I felt like s*** about that interview. People said ‘The Stone Cold Podcast got cancelled because of how bad that interview was.’ No, I’d fulfilled my commitment. That’s why the podcast stopped.

Austin revealed that he’d recently called Moxley to try to get over their awkward moment back in 2016. Thankfully, Austin said that Moxley held no ill will towards him, and they’ll even be doing an episode of The Steve Austin Show in the near future.

We had the best thirty minute conversation. There was never any animosity towards us, I didn’t know how he felt about me and I thought he might hate my guts.

This haunted me for so damn long. People just think that I’m this guy and there’s this Darth Vader forcefield around me where I don’t feel things. I do. When I’ve not made someone look the way they’re supposed to look, that haunts me. So now that we’re back on the same page, I’m looking forward to talking to Jon Moxley.