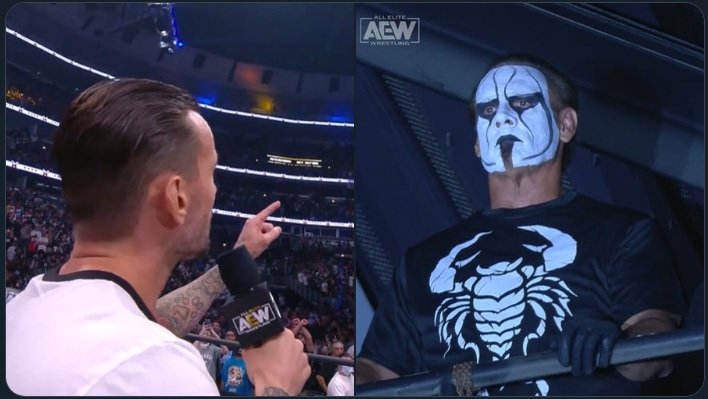 Sting could not believe that CM Punk is now ‘All Elite’! Sting told CM Punk backstage he can’t wait to work with him, and maybe put him over?


Sting told CM Punk he was excited to work with him, and wished he could have in his prime

All Elite Wrestling’s special edition of Rampage entitled: “The First Dance” will certainly be an event to go down in the history books as CM Punk officially became ‘All Elite’. After the show went off the all several top AEW talent and personalities came out to thank the Chicago crowd. First, former AEW World Champion Jon Moxley stated how Chicago is the place for wrestling fans and lavished praise upon the city. Wrestling-Edge transcribed the following. Two big Sting & Big Show AEW matches were recently revealed

Moxley: I have main evented every building from Singapore to Timbuktu to Tupelo, Mississippi – but I have to say, and I say it over and over, a million times when I come through Chicago – there is no better crowd in the world. I don’t care if it’s the Allstate Arena, the Sears Centre, the United Center or the Episcopalian bingo hall down the street in front of two hundred and fifty people – Chicago is the place for wrestling fans.

‘The Icon’ Sting would then keep up the trend by proclaiming how AEW and it’s fans are ‘first-class citizens’.
Sting: It feels really good to be back in Chicago. I can remember way back when we were second class citizens and we then suddenly became a worldwide phenomenon and the talk of the town. I remember repelling down from this ceiling in this arena. I didn’t plan on coming back myself but then Tony Khan gave me a call and I couldn’t say no. I’m glad that I came back and that AEW are already first-class citizens. The AEW Universe are all first-class fans. I’m not saying that for the cheap pop either, I really mean what I’m saying. Thank you Chicago – It’s showtime!

Sting will be in the corner of Darby Allin who is scheduled to take on the aforementioned CM Punk during All Elite Wrestling’s upcoming ‘All Out’ pay-per-view event. The event is scheduled to go down on Sunday, September 5th at the NOW arena in the Chicago suburb of Hoffman Estates, Illinois. A recently fired WWE star took this surprising photo with Sting.

Full comments in the video thread below pic.twitter.com/ENPBASv1IT