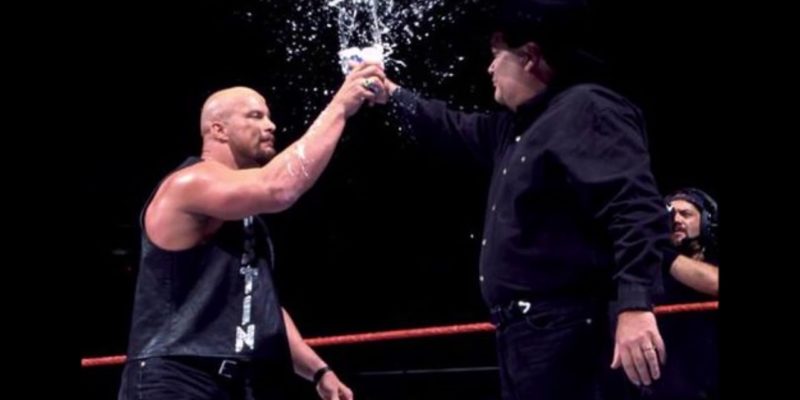 WWE Hall Of Famer Stone Cold Steve Austin was recently a part of a fan Q&A session on his podcast, The Steve Austin Show. During the part of the interactive talk, Austin discussed his relationship with Jim Ross and went on to reveal how he affected his career.

Austin claimed that Ross was a huge part during the early stages of his career as he helped him get a deal in WCW. The former world champion said:

“Now, as I am trying to recall the first time I met Jim Ross, I almost can’t remember, but you have to understand I was a huge Bill Watts Mid-South Wrestling fan, so, man, I grew up with JR.” Austin remembered, “and he’s not very much older than me, but JR was the man. And then, when he went to NWA, that’s when I was watching Jim Ross. He was the man. And all-of-a-sudden, I get a chance to be called up to WCW. He’s one of the guys that lobbied for me and we hit it off. Jim loves football. He knew that I played college football. I wasn’t at Ron Simmons’ level. I wasn’t major college good. I was just good enough to get a scholarship and be on the team. That’s as good as I was. But Jim being in Oklahoma and that Texas/Oklahoma kind of bond, relationship, rivalry, whatever it is, Jim respected and liked football players. He liked guys that were athletic, salty, easy to work with, not people that are toxic or that are trainwrecks, or divas, or hard to work with. So, man, me and Jim always hit it off and we became the best of friends.”

Austin reminisced the time the duo travelled together. He stated that they would often spend the time drinking wine and fantasy booking the territory.

“Me and Jim would ride down the road and we’d have a bottle of wine.” Austin recalled, “I don’t know how we started drinking wine. I used to drink wine like a son of a b—h way back in the day, but we’d drink a bottle of red wine between the towns. It’s only about 120 miles. We’d book the territory, tell stories… If I ever went to a football game I would go stay with him and Jan when she was still with us. And Jim’s out doing his own thing now, but, man, nothing but respect for him.”

The three-time Royal Rumble winner concluded by stating that he feels Ross is the greatest commentator of all time and asserted the importance of Ross on the “Stone Cold” character. Austin stated:

“Jim Ross, to me, with his range, with his storytelling… he paid his dues. I mean, he learned from the ground up. And his inflection and his ability to watch a match, tell a story, get the talent over with the credibility that he had, he was the shining diamond on top of everyone, so always a good experience with Jim. We continue, to this day, to be the best of friends. We don’t talk as much as we used to because we’re going and blowing in different directions. But he was a key, key part of my entire [pro] wrestling career like so many people were, but as far as the recruitment to WCW, the recruitment to WWF [as WWE was known] at the time, so there’s a lot of history there.

Austin felt that the emotion added by Jim Ross on the microphone was essential to the Attitude Era as well. He added:

“Again, if ‘Stone Cold’ would’ve took off like it did and Jim Ross had not been on commentary, I do believe I still would have been successful; however, I think I had the success that I did because of the work that we put into it. This is on the [WWE] end, my end, the synergy, the chemistry, the writing, Vince [McMahon] was a huge part of it, especially when we were going up against each other, but without Jim Ross calling that with the emotion and just yelling, that passion driven style that he had, I don’t think it would have been the same. He was the voice of that ‘Attitude Era’.” Austin added, “I can’t imagine my career because it is so far removed now, but I cannot imagine my career without the iconic voice of the one and only Jim Ross.”

H/T to Wrestling Inc. for the transcript