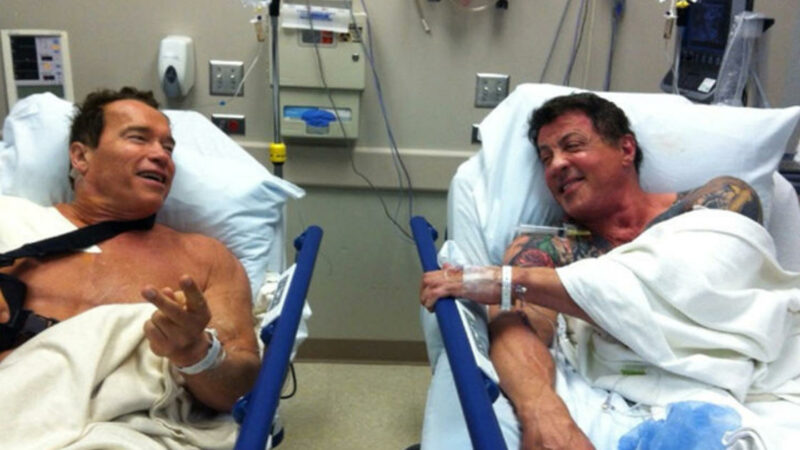 Legendary actors Arnold Schwarzenegger and Sylvester Stallone are two of the biggest names in Hollywood. Their rivalry has been iconic in the industry. The greatness has created long-lasting trouble between them. Nevertheless, they share a bittersweet bonding throughout the years due to their enemy-friends relationship. Their bromance reached another level in 2012 when they were spotted together, not in a movie, but in a hospital.

It has been noted that their rivalry caused Stallone to make one of the biggest mistakes of his career: “Stop! Or My Mom Will Shoot.”

“I had heard Schwarzenegger was going to do that movie and I said, ‘I’m going to beat him to it,’” Sly told The Hollywood Reporter. “I think he set me up.”

Schwarzenegger also further confirmed that the story of the setup something of an urban legend in Hollywood ― was exactly how it happened.

“It’s 100 percent true,” Schwarzenegger told the magazine. “In those days we did all kinds of crazy things to get ahead in our rivalry. Luckily for us and everyone else, today, we root for each other. Thank God, because we sure don’t ever need another ‘Stop! Or My Mom Will Shoot.’”

The two have told variations of the tale before; Schwarzenegger said at a festival in 2017 that he found the script “so bad” but leaked that he had “tremendous interest” to see if Stallone would bite.

“And he went for it!” Schwarzenegger gloated. “He totally went for it.”

“Stop! Or My Mom Will Shoot” was a critical bomb and has a 14% rating on Rotten Tomatoes. Critic Roger Ebert called it “utterly lacking in even the smallest morsel of redeeming value.”