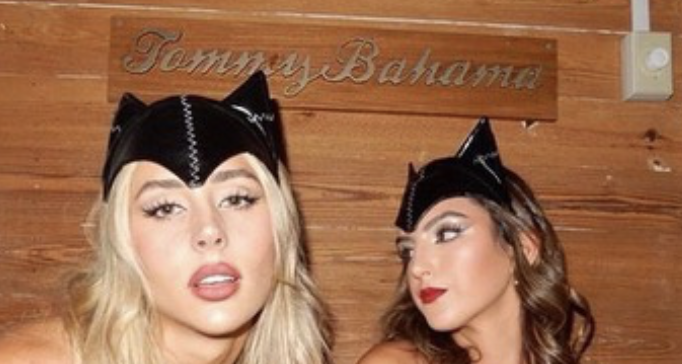 Trick or Treat! The daughter of action megastar and Rocky Balboa icon Sylvester Stallone, Scarlett Stallone recently went to a Halloween party looking bewitching and fetching dressed as Catwoman with one of her friends in an identical outfit. The photo can be seen below.
In other news concerning Sylvester Stallone, true movie buffs know that Stallone was supposed to be in the ever-popular Beverly Hills Cop. However, this didn’t come to be as the acclaimed action star wanted to fit the film more in his image. In a recently released book centered around CAA, one of the top talent agencies in the United States and across the world, a story is revealed just how different the iconic film would have been had Stallone starred in it.

“In the early ’80s, I called Sly about an offer I had received for a movie that I was excited about him doing. I knew that he probably wouldn’t want to do this film because it somewhat parodied his tough-guy image.”

Stallone says; “Ron told me, ‘Don’t change it,’ but I took the script and rewrote it as a kind of compromise, where the guy was action-oriented but he also had a wry sense of humor.” Meyer says; “Nobody wanted his version, so I begged him, ‘Please, do the original script.’” Stallone says; “I didn’t think I could pull it off. Then that ship sailed.”

Meyer concludes; “The movie was Beverly Hills Cop, and as everyone knows, it got made with Eddie Murphy, who became a big star of it.” It’s easy to mock Stallone, but he was no stranger to screenwriting, having written the scripts for most of the Rocky and Rambo franchises. It also takes something to admit that he “couldn’t pull off” the humor of the Beverly Hills Cop script and passing it over to the phenomenal comedic talent of Murphy.