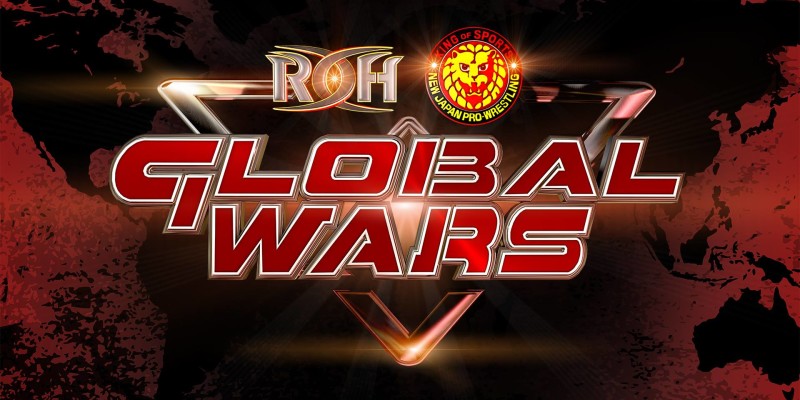 We are less than one month away from GLOBAL WARS and the WAR OF THE WORLDS TOUR!  The collaborative relationship between Ring of Honor and New Japan Pro Wrestling continues, bringing you matches and experiences you can’t find anywhere else!  First up, on Sunday May 8th, GLOBAL WARS is coming to you LIVE on pay-per-view from Chicago Ridge.  This massive event kicks off a busy week for the stars of ROH and NJPW, who are hitting the road to Dearborn, Toronto, and New York City!

GLOBAL WARS has already sold out, but you can still catch all of the action on PPV!  Incredibly, COLT CABANA has returned to Ring of Honor and he takes on ROH World Champion JAY LETHAL in the GLOBAL WARS main event!  But that’s just one match in a full night of the best professional wrestling on the planet.  Signed for GLOBAL WARS live on pay-per-view:

WAR MACHINE VS. THE BRISCOES

DEM BOYS are coming for gold in Chicago Ridge!  Jay and Mark Briscoe are not just Ring of Honor legends, they set the standard for tag team wrestling year after year.  They also hold the current record for most ROH World Tag Team Championship at an amazing eight reigns with the titles.  Can they pull even further ahead in history and make it nine in Chicago Ridge?

Not if WAR MACHINE have anything to say about it!  Hanson and Ray Rowe overcame every challenge in their path, including Rowe’s career-threatening motorcycle accident, on the way to finally becoming ROH World Tag Team Champions.  There’s no way they’re giving up their titles without a fight that could become a WAR!

The Briscoes earned this championship opportunity by winning an absolutely insane number one contenders match in Dallas at SUPERCARD OF HONOR X.  Although the Motor City Machine Guns, The Addiction, and the Young Bucks are undoubtedly three of the top teams in the world, on that night The Briscoes proved they will never be far from championship contention!

War Machine and The Briscoes are very familiar with each other, as they had a increasingly brutal, intensely competitive rivalry in the earlier days of the partnership between Hanson and Rowe.  In fact, most would argue that it was the battles against the Briscoes that pushed War Machine into higher prominence and what fueled their growth as a team.

Now the dynamic has shifted and War Machine are on top of the ROH tag team division!  All championships will be defended at GLOBAL WARS and the entire title picture in Ring of Honor could change!  You can watch live on pay-per-view to watch history in the making May 8th at GLOBAL WARS!