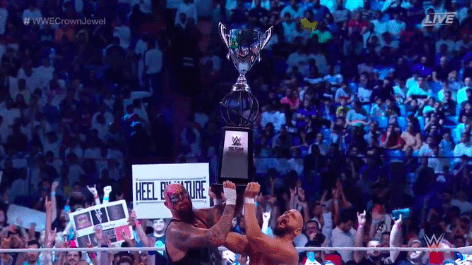 As seen on the Crown Jewel pay-per-view, eight teams battled in a tag team turmoil to determine as to which team is truly the best tag team in the world. The team of Robert Roode and Dolph Ziggler faced off against the Lucha House Party to kick off the tag team turmoil.

Roode and Ziggler defeated the Lucha House Party in a brief match up and soon their next opponents – Zack Ryder and Curt Hawkins showed up.

Roode and Ziggler made quick work of Hawkins and Ryder as well. Next up to face them were Otis and Tucker – The Heavy Machinery.

Heavy Machinery successfully pinned and eliminated Roode and Ziggler after a short brawl. Next up were the New Day.

The two teams went at it for a while with quite a few shenanigans taking place courtesy of Otis and Big E. However, Big E and Kofi successfully defeated Heavy Machinery to advance in the tournament.

Next up were Bo Dallas and Curtis Axel – The B Team. Axel and Dallas tried to bring the fight to Big E and Kofi but were pinned and eliminated rather quickly.

The music hit and out came the SmackDown Tag Team Champions – The Revival to partake in the match next. However, in a shocking turn of events, Dash and Dawson were eliminated by the New Day.

#TheOC is looking to POUNCE.

The final entrants in the match were the RAW Tag Team Champions – The Viking Raiders. Ivar and Erik brought the fight to Gallows and Anderson but the heels ultimately got the W and were crowned “the Best Tag Team in the World”.

The elated Gallows and Anderson celebrated by lifting the tournament trophy.