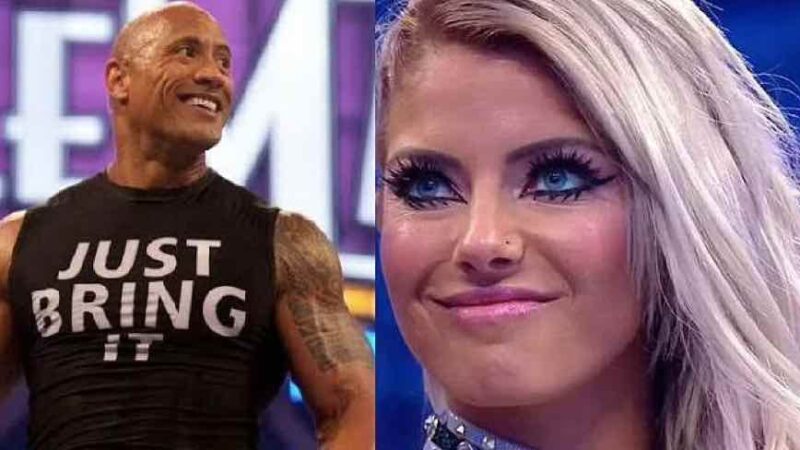 The Rock is one of the richest stars globally. It is not unknown that he has had a great successful career in WWE and then eventually in Hollywood as an actor.‘The Great One’ also has a business mindset and he has also tasted success in his business ventures. One of his most famous business ventures, Teremana Tequila saw rapid growth last year. It seems the former WWE RAW Women’s Champion Alexa Bliss is a fan of the beverage. Bliss recently tweeted a picture of herself enjoying at a resort on Paradise Island. She said she had a double dose of Teremana Tequila the previous night.

The Rock responds to Alexa Bliss

Alexa Bliss tagged The People’s Champion in her tweet, and he replied in style. In his reply, The Rock said Teremana and Paradise make the perfect combination. He hoped Bliss had fun enjoying the combo.

Teremana Requila was launched in March 2020, when the pandemic had just begun to cause havoc across the globe. Teremana, The Rock’s line of Tequila, had sold over 300,000 9-liter cases in its first six months and shipped an approximate 400,000 cases of the beverage, all within its first year on sale. He had also launched his brand of energy drinks, ZOA Energy drinks.

Celebrity Net Worth reported that he has a net worth of $800 million. It was noted that the net worth includes his possible 30-40% stake in Teremana Tequila and a current $2 billion conservative estimate valuation of the brand.

It is speculated that The Rock could make over $1 billion from the tequila company. That would be more than he has ever made in his entire entertainment career. It has been also noted that he is one of the highest-paid entertainers on the planet. In a typical year, he is expected to earn at least $100 million from his various film and endorsement endeavors.