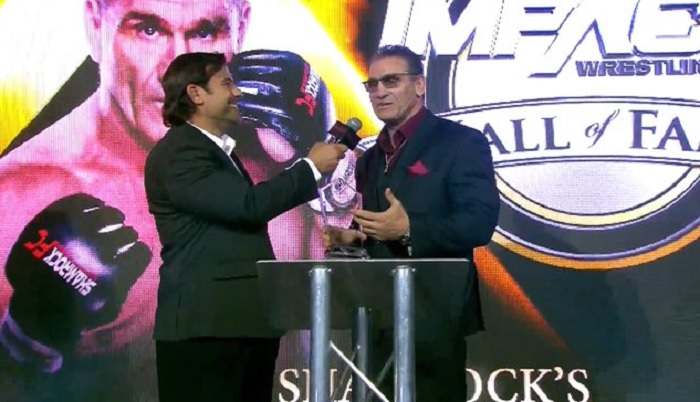 The IMPACT Wrestling Hall Of Fame induction of Ken Shamrock at the IMPACT Bound For Glory 2020 pay-per-view on Sunday night was a star-filled event.

Prior to his actual induction segment on the LIVE Countdown To Glory PPV pre-show, “The World’s Most Dangerous Man” was honored with congratulatory videos sent in by fellow pro wrestling legends and WWE Hall Of Fame stars Bret Hart and Mick Foley.

For the live IMPACT Hall Of Fame induction segment on the PPV pre-show, Shamrock was introduced and officially inducted by Dwayne “The Rock” Johnson, who sent in a video to formally welcome Shamrock into the IMPACT Wrestling Hall Of Fame.

Featured below is a detailed recap of the Ken Shamrock IMPACT Hall Of Fame induction ceremony from the Bound For Glory PPV pre-show, as well as write-ups of the congratulatory videos that featured Bret “The Hitman” Hart and “The Hardcore Legend” Mick Foley.

THE ROCK INDUCTS KEN SHAMROCK INTO IMPACT HALL OF FAME

A video message featuring Bret “The Hitman” Hart congratulating “The World’s Most Dangerous Man” Ken Shamrock on being inducted into the IMPACT Wrestling Hall Of Fame. “The Hitman” calls Shamrock a pioneer to the MMA and pro wrestling cross-over stars.

Now we are treated to another congratulatory video package, this time from WWE Hall Of Fame legend Mick Foley, on Ken Shamrock being inducted into the IMPACT Wrestling Hall Of Fame as part of Bound For Glory Weekend this evening.

We are now getting geared up for the IMPACT Wrestling Hall Of Fame induction ceremony of “The World’s Most Dangerous Man” Ken Shamrock.

Matt Striker is out at a podium at the top of the stage on the Bound For Glory set to welcome the MMA and IMPACT Wrestling legend. He introduces the man who will induct Shamrock, none other than Dwayne “The Rock” Johnson.

The Rock appears via a video that airs and he talks about “The World’s Most Dangerous Man.” He reflects on moments they shared early in their respective WWE careers. Rock also gives props to Shamrock for helping him be the best heel he could be and tips his cap for the path Shamrock blazed as a MMA / wrestling crossover star.

Now we’re back live where Striker introduces Shamrock, who makes his way out to the podium. He stutters at first, which he acknowledges after stating he is nervous and doesn’t know what to say. He wants to thank some people such as Nelson Royal and others that helped him early on in his career.

Shamrock then goes on to thank the WWF, which he refers to by the old pre-World Wildlife Fund days name. He thanks Vince McMahon, Bret Hart, Mick Foley and Dwayne “The Rock” Johnson for helping him establish his character. He thanks his wife and then the fans all across the world.

He gets a little amped up when thanking the fans. He says “God bless!” and wraps up his speech on that note. His music plays and Striker sends him off as another Bound For Glory PPV promo airs.

.@TheRock is here to honor The World's Most Dangerous Man @ShamrockKen.#BFG2020 pic.twitter.com/8NjzmFQpMu