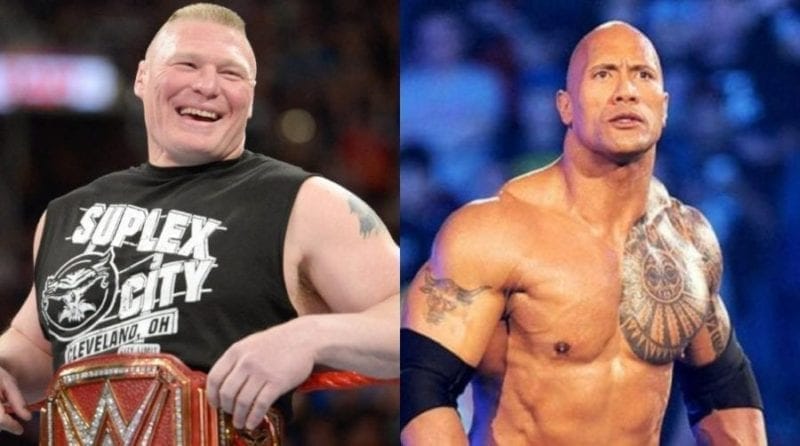 The Rock and Brock Lesnar are two of the biggest names in WWE. The former has spoken highly of the former WWE rival Brock Lesnar via an Instagram post recently.

The Rock opens up on Brock Lesnar

The Rock and Brock Lesnar have had several matches against different opponents in WWE. However, their iconic clash a couple of decades ago in the main event of SummerSlam 2002 still remains to be a memorable bout. The match had the Undisputed WWE Championship on the line. In what many deemed a “passing of the torch” moment, The Beast Incarnate put The Great One down to become the youngest WWE Champion in history.

The Rock took to Instagram to share a heartfelt post remembering the iconic bout. He posted the final moments of the match and wrote that the duo made history together at The Biggest Party of the Summer, and pro-wrestling was never the same. He then heaped praise on Lesnar, stating he was “one of the greatest pure athletes” with whom he shared the ring.

Here is what his caption read:

20 years ago this week, we made history in New York and pro wrestling was never the same again 🔥💀🔥

I always had great chemistry with Brock as he was one of the greatest pure athletes I’ve ever danced with.

We spent about 6 months wrestling around the world together, grooming Brock to become @WWE Heavyweight Champion.

It culminated to this historic SUMMER SLAM PPV where the crowd was absolutely electric.

#1) In wrestling terms, I “did the honors” of having Brock beat me right in the middle of the ring, 1-2-3.
Brock is new champion.
Brock is new face of WWE.

#2) My contract was up in WWE and I quietly – and GRATEFULLY – retired as a full time pro wrestler after an incredible (and insanely short) 6 year career.

It’s so wildly incomprehensible at times when I think back – that I only wrestled for 6 YEARS.

How crazy is that irony?