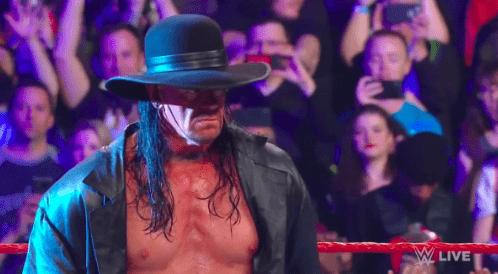 At WrestleMania 35, poor Elias was interrupted by John Cena’s Doctor of Thuganomics who roasted him with a series of sick bars and hit him with the FU.

On the RAW after Mania, Elias came out looking to continue his performance and rap a few bars in response to John Cena. Surprisingly enough, Elias rapped some pretty sick bars but sadly he unknowingly made one mistake.

In his final verse, Elias claimed that the next man to interrupt him will be a “dead man”. As soon as the Drifter made this claim, the lights went out and the gongs hit.

Elias soon realized that he’d made a mistake but still tried to defend himself off against the Deadman. But all that resistance proved to be futile as the Undertaker hit him with a Tombstone.

What'll it be, @IAmEliasWWE? Want to take a step into Death Valley? #RAWAfterMania #RAW #Undertaker pic.twitter.com/RggK2gkE9x