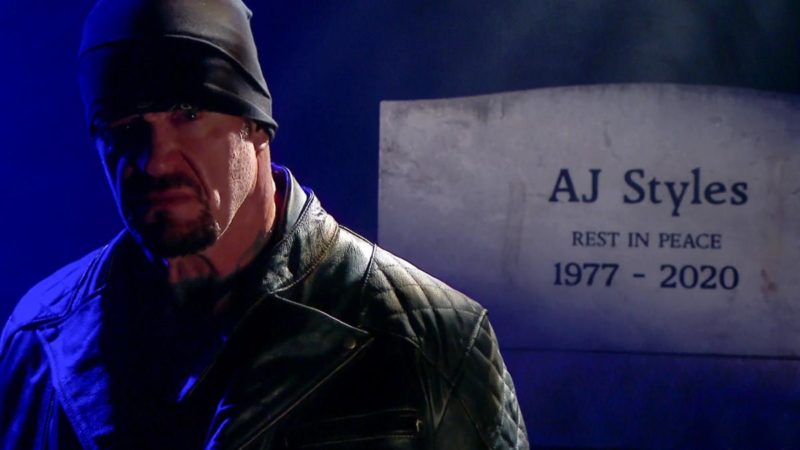 The Undertaker brought back his iconic biker persona at WrestleMania 36 for a Boneyard Match against AJ Styles this year. This kind of cinematic match was a first-ever for WWE.

The Deadman has on multiple occasions expressed how much he likes the way AJ Styles works. Ahead of his Final Farewell at this Sunday’s Survivor Series, The Undertaker opened up to SPORF about the match, among other things.

The Undertaker wished to have a traditional match with AJ Styles

The Undertaker answered if he wanted to face any Superstar in WWE but it never happened. He said that wanted to have a traditional wrestling match with AJ Styles in the squared circle.

He added that he was very proud of the Boneyard match they put up. But a traditional match was something he wanted to happen.

The Deadman went on to say that he loves what AJ Styles does in the ring, and compared him to Shawn Michaels, whom he has hailed as the ‘greatest in-ring wrestler of all time’.

“Although I’m super proud of the Boneyard match, I wish… I would have liked to have had a ‘traditional match’ with AJ Styles in a wrestling ring. I told him on several occasions that ‘I wished you had got here 10-15 years earlier’, because I just love the way he works. I love what he does in the ring. I kind of called him the ‘modern day Shawn Michaels.'”

AJ Styles is currently considering himself the captain of the RAW Men’s Team for Survivor Series. His team mates are refusing to acknowledge that.

In the weeks leading to The Undertaker’s Final Farewell, several WWE Superstars cosplayed his iconic portrayals over the years. AJ Styles chose to replicate the biker attire he donned at the Boneyard Match, right to the bandana.

The Undertaker will be live at Survivor Series this Sunday, November 22.