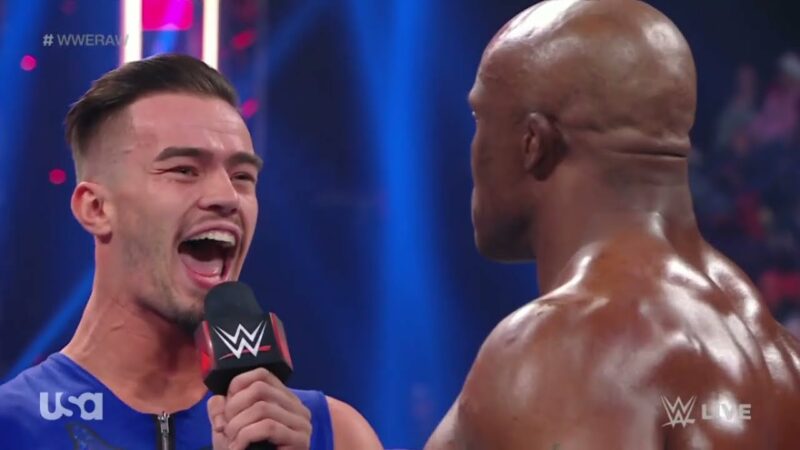 Theory recently won the Money In The Bank briefcase that contains the contract for a guaranteed Championship bout. He made an appearance on RAW in the opening segment. He was seen holding the briefcase. He confirmed his match at SummerSlam and a clip has now emerged of a somewhat hilarious botch where he seemingly revealed the contents of the briefcase.

Theory accidentally reveals the content of Money In The Bank briefcase

This week on RAW, the 24-year-old confronted the newly crowned- United States Champion Bobby Lashley to tell him that he has a rematch for the title at SummerSlam 2022. At Money in the Bank, Lashley defeated the young star to win his third US Championship. While his feud against John Cena was expected at SummerSlam, Mr. MITB will face Lashley instead. In the process, he confirmed the rumor that the Cena-Theory match has been delayed until WrestleMania 39. Fans had been speculating that the Theory would be Cena’s opponent at SummerSlam. But as it seems, that is not the case.

On the latest episode of RAW, Theory used the Money in the Bank briefcase to assault ‘The Allmighty.’ During a moment, the briefcase opened in a botch and seemingly revealed its contents, although it was facing the opposite direction of the hard camera.

You can watch the clip below:

Nice botch there from Theory, must have already lost his contract… pic.twitter.com/jTuyPf2npw

Previously, the Dave Meltzer of Wrestling Observer Newsletter reported that WWE might end up pushing back John Cena’s next match for WrestleMania:

“At one point the idea was John Cena vs. Theory, and there was a tease on television this week. However, Cena is not announced for any future TV dates and given how many tickets he moved in Laredo, if he was announced for a show, he’d move more tickets right now than anyone except Dwayne Johnson. So it makes no sense not to advertise him. But they wouldn’t do such a match without more of an angle. So the match, which is clearly a direction, may also be delayed for WrestleMania.”