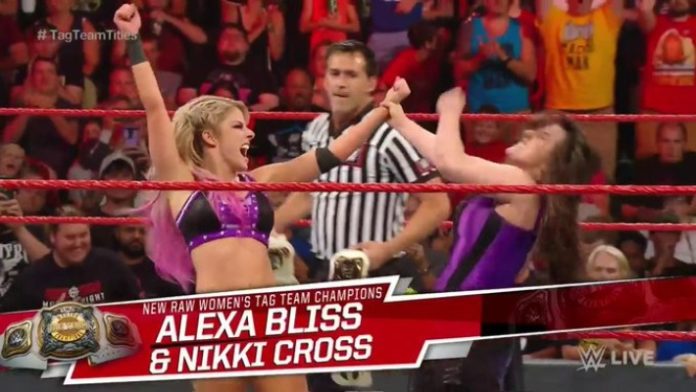 This week’s episode of Monday Night RAW was the final show before Summerslam and WWE decided to have some titles change hands before the event on August 11th.

The IIconics defended their WWE Women’s Tag Team Titles against The Kabuki Warriors, Mandy Rose & Sonya Deville, and Alexa Bliss and Nikki Cross in an elimination match. The IIconics were the first ones to be eliminated, so new champions were a certainty.

Asuka tapped Mandy Rose out with the Asuka Lock and then it was down to The Kabuki Warriors and Alexa Bliss & Nikki Cross. Towards the end of the match, Kairi Sane was the legal competitor and after she climbed up the top rope, she was thrown down by Nikki Cross.

Then Alexa Bliss hit the Twisted Bliss on Sane and Bliss & Cross won the match. They are now the new WWE Women’s Tag Team Champions.