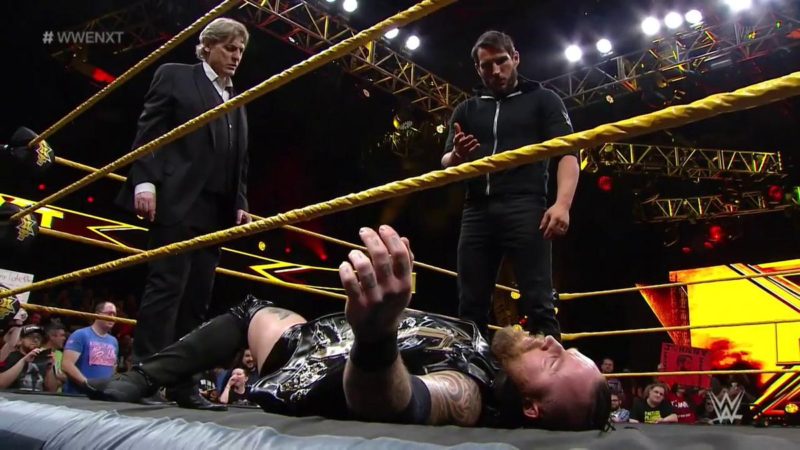 Tommaso Ciampa broke the hearts of many fans when he turned on his DIY partner Johnny Gargano last year. After failing to capture the NXT Tag Team Championships at NXT TakeOver: Chicago, Ciampa ruthlessly beat down his former best friend.

Over a year later, and Ciampa has returned from his injury, defeating Gargano multiple times and capturing the NXT Championship. The former champion, Aleister Black, was scheduled to partake in a triple threat match for the belt at NXT TakeOver: Brooklyn IV but was attacked by an unknown assailant.

Last night, Johnny Gargano jumped Black, catching him with a superkick as he was turning away from William Regal. While Gargano didn’t address the attack from two months ago, it can be assumed that he was the one who took Black out before the title match.

Tommaso Ciampa took to Twitter to address the situation,

Black would eventually put out a serious statement on the incident, explaining his issues with Gargano in the past.

Two days before TakeOver Chicago, where DIY would take on AOP in a ladder match for the NXT Tag Team Titles, I suffered a severe ankle sprain.

Within 24 hours the NXT fan base was prepared to replace me, suggesting replacement after replacement to tag with Johnny.

My eyes were suddenly open. The NXT fans are weak and fickle. They are pathetic.

Going into TakeOver Chicago, Johnny knew better than anyone how I felt in regards to our “fans”. But his eyes were still closed…he was still blind.

That night, after we lost, I looked Johnny in the eyes one last time, and I knew…I knew he wasn’t ready to see the light.

Johnny was still blinded by the fake admiration of the NXT scum. I never hated Johnny. I hated what he represented.

After last night’s episode of NXT, it is clear, Johnny has finally seen the light.

Johnny Wrestling is dead. But Johnny Gargano has never been more alive.

It’s unknown where the story goes from here. However, it’s possible we may be seeing the mending of the friendship between Tommaso Ciampa and Johnny Gargano…by way of the pure hatred in their black hearts.