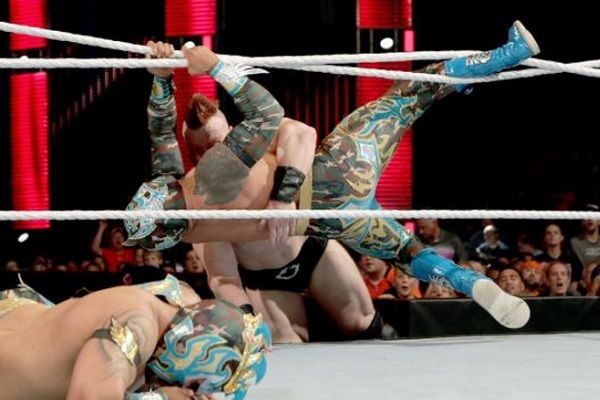 Pro Wrestling has grown from the old-fashioned elegant chain wrestling to the modern day high-risk manoeuvres. Spots are a common visual these days with it being the most effective way to draw the audience into the match, while some spots pay off, some end up being hilarious while a few end up being fatal.

The WWE has seen it’s fair share of failed botches over time. While the visual treat of wrestlers executing enticing moves never seems enough, they are just one failed botch away from being halted on the course of their career.

Despite failed spots appearing as bloopers, the consequences suffered have been pretty fatal given the records. So let’s have a look at some of the biggest botched spots in the history of WWE. In what seemed like a regular fast-paced 10-man tag-team match on RAW, Spike Dudley took one of the most wince-inducing bumps in the history of the business. Having set a table on the outside of the ring during the initial stages of the match, the table was never used much to the dismay of the crowd.

However, after the match, an attack on Spike Dudley by the La Resistance with the championship belts got the crowd going as they proceeded to throw Dudley from the ring to the table set on the ringside. Unfortunately for Dudley, the duo completely botched the powerbomb by missing the table, which resulted in Dudley’s head bouncing off the mat in a ruthless fashion.

The botched spot resulted in a concussion for Spike Dudley and had to be written off from TV for a while. Check out the incident below. Randy Orton’s feud with Triple H still remains one of the most fuelling rivalries till date. While the duo battled it out for the WWE Championship at One Night Stand 2008, Randy Orton suffered a major shoulder injury as a result of a failed botch.

Midway through the last man standing match, Randy Orton was prepping for his devastating RKO, which The Game managed to counter with a throw over the top rope. While this seems a routine bump, Orton landed on his fragile shoulder, which has been injured in the past.

The botch resulted in a broken collarbone which took several months to heal. Watch the painful spot below.

8. Mercury gets a wake-up call Ladder matches often rely on spots which makes it one of the riskiest and brutal branches of matches in pro-wrestling. While we witness things almost go smoothly in ladder matches, the bout for the WWE Tag Team Championships at Armageddon 2008 was not one of them.

During a planned spot, where Jeff Hardy would jump on the ladder arranged as a see-saw, Joey Mercury failed to protect his face on time as the ladder slammed into his face with sheer force. What followed was a rough sight, as blood started to pour all over Mercury’s face. The injury was as bad as it seemed since it resulted in a complex fracture of the nose which needed several stitches.

Have a look at the infamous botch below. Thriving at the prime of his career, Shawn Michaels had all of it going his way. Little did he know that a simple drop over the rope would collapse the world around him in a flash. In an encounter with The Deadman at Royal Rumble 1998 in a Casket Match, the Heart Break Kid was tossed outside the ring.

During the process, Michaels’ back hit the edge of the casket which seemed rather inconsequential at that time. However, the small botch forced Michales into an early retirement due to a crushed disc and two herniated discs in the lower back.

But, as known to all, Michaels defied all expectations to come out of retirement better than ever. One can only ponder the visual of Michales thriving in the Attitude Era had the botched spot not happened. Check out the career-altering moment here: The most recent botch on the list saw John Cena take a huge hit to the nose which happened on the July 27th, 2015 episode of RAW. Defending the United States title against Seth Rollins on the red brand, the Cenation leader was caught by a rough knee by the Architect.

For a second everything seemed normal until Cena managed to display the consequence of the knee shot with a disfigured nose. The visual of blood along with the deviation of the nose got everyone squinting.

Cena, although, admirably continued with the match as though nothing happened. This began a rough phase for Rollins, as he was termed as a “rough worker” following this botched spot as well as a career-ending injury to Sting, a few months later. Before the part-time contracts and shuffles with UFC, Lesnar was a legitimate force in the WWE. However, on the episode of SmackDown in 2002, The Beast and Hardcore Holly were involved in one of the most controversial botched spots.

Going for a powerbomb on Holly, Lesnar struggles to get Holly all the way over to the top and awkwardly drops Holly on his neck. While there have been accusations of the Beast deliberately botching up the move, Holly has gone on to deny the fact that the botch was intentional.

The injury forced Holly to undergo surgery and as a result was away from the ring for over a year. Watch the awkward landing right here. The WWE Universe were blessed to witness an absolute classic at WrestleMania 25 as the lights of heaven faced the darkness from hell. Despite Michales and The Undertaker at their best, the botched spot in the middle somehow managed to add more drama to the match.

Midway between the match, The Phenom went for a  trademark suicide dive on the fallen Heart Break Kid outside the ring. As per the original plan, Micheals would move the cameraman (son of Jimmy Snuka) into the path, who in turn would catch the Deadman, but things went wayward when the cameraman failed to grab The Undertaker resulting in a head-first collision on the mat.

With the count beginning and The Undertaker lying motionless outside the ring, the fans were on a whole other level of anxiety which managed to spice up the interest in the match. The Deadman barely managed to beat the count and proceeded to continue with the encounter, thereby giving us, arguably the greatest match in WWE history. Lesnar makes an appearance on the list again, but instead of SmackDown, he took things to the greatest stage, the main event of WrestleMania 19. Facing Kurt Angle for the championship, Lesnar had Angle down on the ring, he then proceeded to surprise everyone by climbing the turnbuckles to attempt a move on Angle who was pretty far away.

Lesnar, rarely displaying any high flying manoeuvres, managed to whip out a Shooting Star Press, but however, he fell short of Angle and ended up with a concussion.

Despite the concussion, The Beast managed to finish the match and captured the title. The dazed look on Lesnar holding the title speaks the entire story for itself. One of the most talked botches occurred during a taping of SmackDown on October 5, 1999. While the above-mentioned botches did not have any permanent consequences, this botched spot managed to end the career of the victim.

Droz faced D’Lo Brown in a one on one match during the taping and a horribly botched powerbomb on Droz resulted in two fractures on the neck which left him a permanent quadriplegic. The WWE have not released footage on the incident, with only a snippet of Droz being carried away being included in the Don’t Try This At Home video package.

Both the wrestlers get along to this day after agreeing that it was an accident. Droz also has managed to regain motion in his upper body over the years. The carrying of Droz from the ring is included in the video below at the 0:12 sec mark. The most infamous botch occurred on a matter of misunderstanding between Stone Cold Steve Austin and Owen Hart. Clashing for the Intercontinental Title in Summerslam 1997, It was initially planned that Owen Hart would reverse Austin’s tombstone attempt and execute one himself. However, Hart did not execute the move by dropping down to his knees, instead, he opted to go for a different route.

Austin’s head was way too below the safe zone and the abrupt force put force on Austin’s neck that it left him momentarily paralyzed. Miraculously, kicking out of the move, the Texas Rattlesnake immediately wrapped up the match with a roll-up.

The injury meant that Austin’s neck was never the same again and forced him to retire at the age of 38 after WrestleMania 19 in 2003. Despite, the topic of the injury sparking up a backstage confrontation between the two wrestlers, Stone Cold forgave Hart after the latter’s death at Over The Edge 1999.