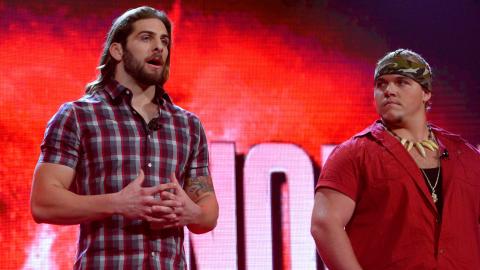 Tough Enough’s Tanner Saraceno recently appeared on the Two Man Power Trip of Wrestling Podcast to discuss his time while on the show, the format of the show, and having heat with ZZ. Down below are the highlights.

On having heat with ZZ:

“That was actually sparked by a message I received from ZZ. Upon returning back home. I don’t have a lot of money, I have to work for everything I have so I am in the process of trying to set myself up to be able to train and support myself financially as well so coming back home so I went to an (MMA) fight and the promoter promoted me a bit because he had a lot of WWE fans there and I went to another fight this past Saturday night and I think that is why ZZ said what he said. ZZ said to me in a message I thought that you really wanted to do this (wrestling) and the first thing you do is go back home and you are back into your MMA world. I took that very offensively, coming from him. In my opinion he doesn’t understand the struggles I have to go through financially and that I make money off this. This is how I pay my rent and utilities. I think ZZ being so young he may not understand to struggle financially, I’m pretty sure his parents are paying for all of his stuff, he’s 19 he’s probably still living at home. I felt the need to expose the lies that he was claiming that he was eating healthier and he is eating better and manipulating the crowd and there he is. We go out to eat healthy and he walks over to Burger King. Don’t call me out on making a living for myself while you are doing your own thing and manipulating the world.”

On the Tough Enough experience:

“I was definitely blessed for the whole experience and the opportunity that was given to me and I have no regrets going through it. There were just a few things that maybe needed a bit more work, I just didn’t have time to improve fast enough on I guess. Overall the experience was mind-blowing. The way the Superstars interacted with us and the hospitality and sense of family that was built was an incredible experience.”

On the format of Tough Enough:

“I thought it was enjoyable and at times thought it was frustrating or nerve-wracking. You have to wonder do I have to impress the coaches this week during a challenge and then I’m going to have to impress the judges who maybe think something differently. There are different styles and they do all have different styles between the coaches and the trainers so maybe one thing that Billy Gunn loves Daniel Bryan may not like so much. Things like that and what you are thinking when you are going out there, then it comes down to the WWE Universe and your votes and your career depends on impressing them as well. It’s real confusing at times, who you are impressing and who you are angering.”

You can listen to the entire interview down below: