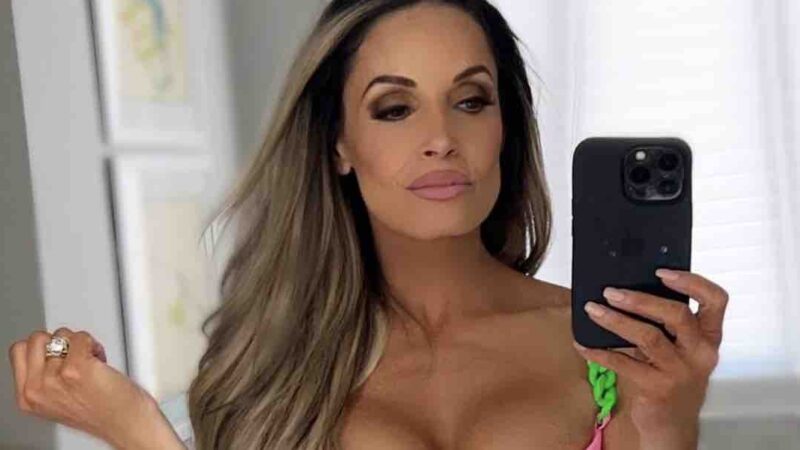 WWE Hall of Famer Trish Stratus and the former WWE RAW Women’s Champion Becky Lynch have called out each other on multiple occasions. This time around, Stratus made some bold claims on ‘Big Time Becks.’

At the WWE Hell In A Cell Premium Live Event, Becky Lynch challenged Bianca Belair and Asuka for the RAW Women’s Championship in a triple threat match. Lynch was unable to win the match despite her best efforts. Following Becky Lynch’s loss, Trish Stratus took to Twitter and stated that a match between herself and Lynch would be a huge match. Stratus added that she would win it as well. Lynch would reply to the tweet as well.

“It would be a SPECTACLE that for sure I can SEE me winning.”

@BeckyLynchWWE although a great asset to the women’s diVSION seems – hmm, how can I FRAME IT – a bit … off.”

Lynch then took note of the Tweet and responded back writing:

“I’m off the charts Trishy-poo. Don’t test me”

I’m off the charts Trishy-poo. Don’t test me

Trish Stratus recently spoke on a QA Panel at ‘For the Love of Wrestling’ in the UK, where she answered numerous questions. Stratus showed interest in returning to WWE as a GM. She said that she always wanted to go back if she got the opportunity.

I would gladly accept that role. I always think — like I said, to go back, it has to be something challenging, something different, something different for you guys. You know, you just don’t wanna see me being a babyface, kicking butt, winning championships, boring, right guys? Do we or would you — I don’t know. I can’t read the crowd. I’m not sure what they want. What do you guys want? What do you want? What should I do next? I always say if I go back, the one thing I’m missing is a heel run so that would be kind of fun, you know? Yeah.