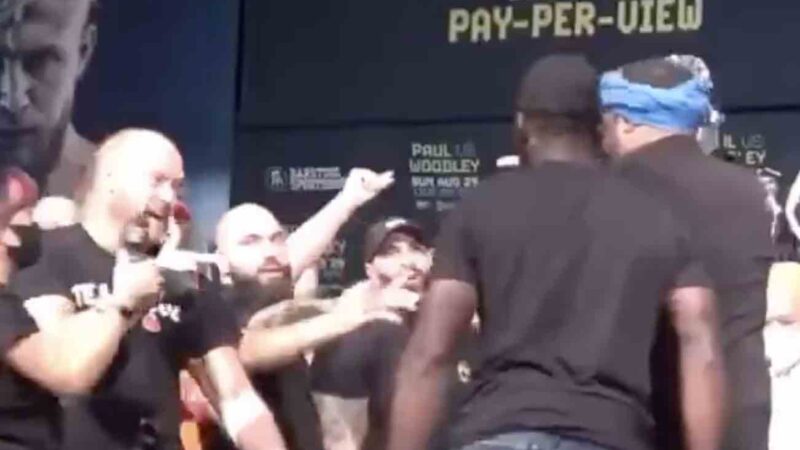 Jake Paul’s Dad Greg Paul jumped onstage and appeared to try and go at Tyron Woodley after Jake failed trying to steal his hat. When Tyron got up in Greg’s face, he appeared to back down in a cowardly way. Gotcha Balls?

The YouTuber turned professional boxer, Jake Paul is set to square off against the former UFC Welterweight Champion Tyron Woodley on August 29 in a boxing match. Currently, the odds are in favor of Jake Paul even if Tyron Woodley is definitely the biggest opponent for Jake Paul so far. Jake Paul might be faking an injury for his upcoming boxing match against Tyron Woodley.

Jake Paul may play a bad guy in the media, but at UFC 264, he was a real life good guy to two young female fans, as he posed for a photo with them as seen below. Jake Paul recently told ‘Below the Belt’ that he negotiated with Nate Diaz for a boxing match, but that the fight would be too easy. In the interview taped prior to UFC 263, he correctly predicted Diaz would lose, and that he is ‘washed up.’

When Jake Paul recently landed in Cleaveland, his hometown, a member of his team greeted him sporting an interesting t-shirt. The graphic on the t-shirt was Jake Paul walking two dogs with the faces of Deontay Wilder and Conor McGregor. Naturally, Jake Paul loved the t-shirt and many fans are well aware of the beef he has with both of the combat sports stars.