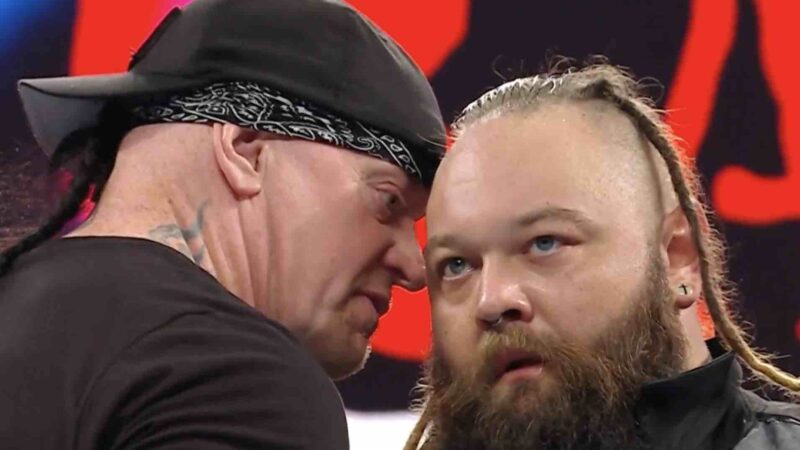 WWE fans saw a massive moment between the WWE Hall of Famer The Undertaker and Bray Wyatt during WWE RAW’s 30th Anniversary. Fans have been wondering what ‘The Phenom’ said to Wyatt during the segment last night. Twitter is flooded with speculation, but one answer stands out from the rest.

The audience at the Wells Fargo Center saw a great moment after The Undertaker and Bray Wyatt stood toe-to-toe. Both stars have a history dating back to when the Wyatt Family was still intact. They even fought at the Grandest Stage of them All in 2015.

After a brief staredown, ‘Taker exited the arena on his motorcycle but not without whispering a few words to The Eater of Worlds. Before the episode aired, reports stated that a passing of the torch moment would occur in the segment involving The Phenom.

The Undertaker apparently whispered something in Bray Wyatt’s ear. Even the supposed words that were said hint that the torch of darkness has indeed been passed on to Wyatt, as The Phenom didn’t appear in his gimmick as The Deadman.

According to a fan theory, the segment between Taker and Wyatt ended with the words: “darkness is forever.” Such a conclusion gets solidified after lip-reading the Hall of Famer.

In the beginning, The Phenom might have implied that Wyatt is the “next Undertaker.” WWE hasn’t disclosed the answer yet.

Moments define this industry. This one was special! https://t.co/twvK5NEU6u

This moment justified a lifetime of sacrifices for me. A lifetime of people treating my uniqueness like it was a disease. Through all the bad times I never changed myself to fit anyone’s narrative. I’m proud of that. Thank you Taker. #SuckItLAKnight pic.twitter.com/nQHYWNq7CL