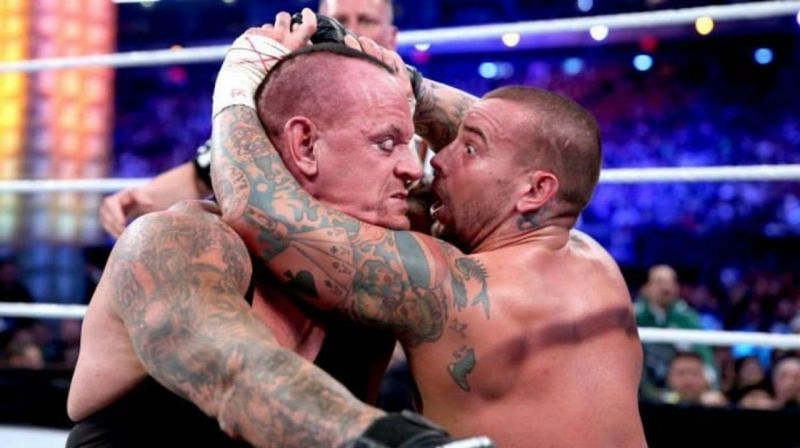 On the latest episode of the The Joe Rogan Experience over on Spotify, host Joe Rogan and former WWE Champion The Undertaker discussed the rumors of CM Punk allegedly going to AEW and his time in the UFC. Wrestling-Edge.com transcribed Rogan and Undertaker’s comments below.

Rogan: What is CM Punk doing? Is he wrestling again?

Young Jamie: No, no I don’t think he went to AEW or anything.

Undertaker: I’ve seen him a couple times on one of FOX’s shows.

Young Jamie: Yeah, they had him on a few times, I think they stopped doing that show. They had him doing a little role like: “here’s what’s happening this week on WWE on FOX” and it was like on FOX Sports 1 or whatever. That was it though, I think they cancelled that show.

Rogan: That was a crazy gamble for him to fight.

Undertaker: Yeah, I’m not real close to him, we got along but I didn’t understand it. Sometimes people need a new challenge but he was a top dude. He was a top guy for the company.

In other news regarding CM Punk, former associate of the ‘Straight Edge Superstar’ and current NWA Women’s Champion Serena Deeb discussed her time working with CM Punk on a recent edition of the AEW Unrestricted Podcast.

Deeb said: “It was a learning experience working with somebody like Punk. He has a very strong personality, and he has very strong beliefs, so he will fight for those beliefs until the day he dies and he will not apologize for it. I think that’s what got him really far in wrestling and gave him a lot of success. Not only that, but that’s a quality that I think really worked for him. He would speak up, and he would speak his mind. If he didn’t like something, he would communicate that. There were several times when he didn’t like something and it was changed.”

Deeb then continued: “So, I learned a lot from him just in terms of confidence. He’s somebody who I really admire in that in that realm. I think favorite moments – obviously doing WrestleMania. Punk wrestled Rey Mysterio, and probably my favorite moment the entire time managing was in that match when Punk was on the ropes ready to take the 619, and Rey hit the ropes. I hopped up on the apron, and there were 72,000 people there in Phoenix. The boos – literally across my back, I felt these boos just standing on the apron. This little 5’4″ girl in this huge stadium, and the people were so mad in that moment, and it was just an awesome feeling.” (H/T to Rajah.com for the transcriptions”