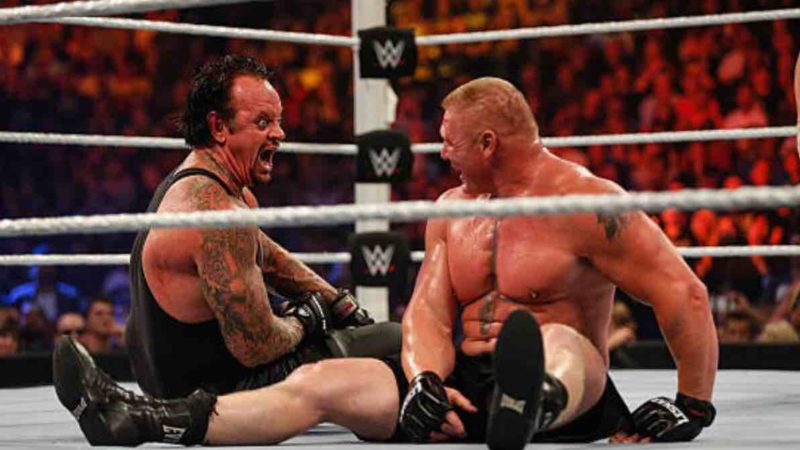 Undertaker wants to see a huge match! Bobby Lashley just successfully defended his WWE Championship against The Miz. While it was recently reported that that Lashley’s associate MVP took to social media via Instagram to promote a highly speculative dream match between Lashley and ‘The Beast’ Brock Lesnar. One WWE legend – The Undertaker gave his seal of approval in wanting to see such a match take place as his official Instagram page by commenting on the post with dollar signs. FOX Sports’ Ryan Satin tweeted the following. Bobby Lashley recently teased this reunion with Lio Rush.

In other news regarding ‘The All Mighty’ Bobby Lashley and hopes of potential championship dream match against former WWE Champion Brock Lesnar, Lashley recently spoke to TheWrap.com to discuss the status of this highly anticipated match.

“I have no idea… The thing with Brock is everybody has been saying that basically from the day that I came into wrestling. They were like, ‘Oh man, there’s Brock! Him and Brock. Brock! Brock! Brock!’ The whole entire time. And I really do not know. I know I spoke with somebody that I was really close to him and they just said, no, it’s just not the time. The only one I can really ask in that manner is (Paul) Heyman, because no one else really talks to Brock, that I know of, I don’t talk to Brock, I really don’t even know Brock that much. If he were to come back and had a match, I think it would be phenomenal, I think it would be great. But I think even a bigger match, because you can’t just overstep Drew (McIntyre), Drew beat him last year at WrestleMania. Drew is, if you wanted to paint a picture of a champion, that’s what they look like. So beating Drew is the one. So I think a triple threat with the two of those guys would be an incredible thing. It would be crazy. Normally, I wouldn’t go for a triple threat, but something like that is, hm, who wins that? And what does that lead to afterward. So that’s always a huge deal also, But then me and Drew still have some business left unattended, because I kind of beat him the other day, so I’m sure he’s going to want to deal with that… The one thing that I think is cool is that the match that everybody thinks Brock and I will have, Drew and I will have.” Bobby Lashley ‘to lose’ WWE title at this major show.

Lashley continued, “Or if he came back, I would love to take both of them. One and then the other. I love it. How I like it is, I know what kind of person Drew is… Drew loves to fight, so I know that’s going to be an amazing match once we have it. But the thing with Brock, I think, there’s just a lot of similarities. There’s only a few people that have come into wrestling that look like I do or look like Brock does but then has that realism of actually having a background in amateur wrestling. So it’s like, man, this is what wrestling is, a competition between two Goliaths like this. And I know everybody wants to see it happen and I’m sure it will happen sooner or later. I just don’t know. I think that’s a question to ask Heyman.”