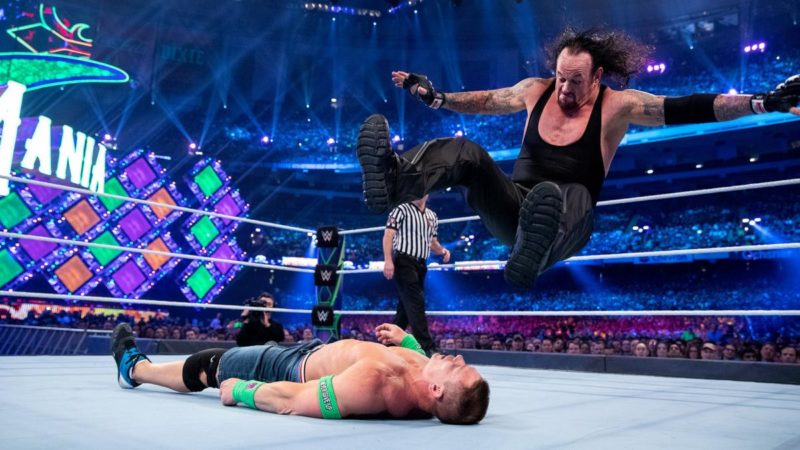 John Cena’s father, John Cena Sr. recently spoke on the UnSKripted podcast, where he was asked about what his favorite WrestleMania match regarding his son was. While the elder Cena did not directly answer the question stating that he loved almost every match at ‘The Show of Shows’ that John was in, he did mention one that particularly Underwhelmed him – John Cena’s match at WrestleMania 34 against The Undertaker. Credit to SportsKeeda for the following quote. John Cena recently reacted to WrestleMania ‘losing’ fans.

“There’s been so many. I can’t just pick one. I really can’t. It’s very difficult because every match he was in, I think that they were good matches. The match I wasn’t impressed with was the Undertaker match. That was just a quickie. That was a bury. Two minutes and it’s over.”

In other news concerning John Cena, ‘The Leader of Cenation’ was the topic of discussion during a recent episode of ‘Something to Wrestle’ with Bruce Prichard. Here, the Executive Director of WWE Monday Night Raw and Friday Night Smackdown discusses who had a bigger impact on the industry – John Cena or Hulk Hogan. Prichard told Conrad Thompson the following remarks. Credit to 411 Mania for the below quote.

Cena also recently revealed if he watches AEW Dynamite or not.  “I think that both owned their era. That’s a toss-up because they were completely different eras, and it wasn’t like Hogan finished up his run, and here comes Cena. It was completely different generations, and it never even, in many ways, had even been exposed to Hulk Hogan by the time John Cena came along. Cena was their only thing, but Hogan was the first. Man, Hulk was a maniac, and that kid audience loved him. Cena never broke, and that audience of kids loved him. Hustle, loyalty, respect. That was his mantra. Say your prayers, take your vitamins, and train. That was Hulk’s. They were different at different times, but they owned their eras.”